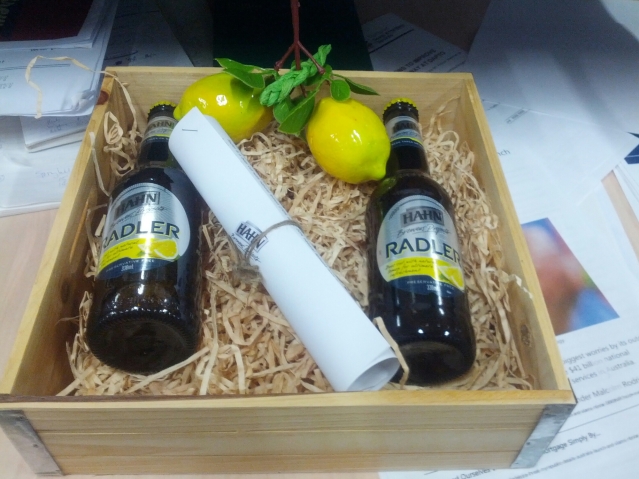 1) Yeah, it’s called Hahn Radler, but it’s not actually a radler at all. My understanding of that style is that it’s a mix of beer and lemonade. But there’s no lemonade here. Instead there is ‘‘natural lemon’’ – which is actually not lemon juice but lemon flavouring. Though the name would appear to have been crafted to make some think actual lemons have come into contact with this product.

2) This is touted as the first product from the ‘‘Hahn Brewers’ Projects’’. What’s that do, you ask? Well, I’ll let the label answer you – ‘‘The Hahn Brewers Projects explore our passion for pushing the boundaries of brewing’’. Really? How is taking a watered-down SuperDry and adding fake lemon ‘‘pushing the boundaries of brewing’’? Answer – it isn’t. If they want to surprise people, they should start with giving that Hahn Bacon beer a real release. That beer would sell.

3) I feel sorry for the brewers at Hahn. When they were told there would be a special brewers series, I wonder if they got excited at the prospect of being able to stretch themselves, to free their mind from the mind-numbing task of making another batch of SuperDry. Then the guys in marketing said ‘‘hey, we’re going to push the boundaries of brewing by making …. wait for it … a radler!’’. Those poor little brewer hearts must have sunk so low.

4) When the media kits for the radler went out I saw more than a few of the obligatory mockery – talk about how crap this was going to be, about how they were going to struggle to give it away. I figured that was a bit rough. You know how you hate it when mainstream drinkers write off craft beer without tasting it? Well, you’re basically doing the same thing. One of the main rules here at Beer Is Your Friend is you can’t write off a beer for tasting crap until after you’ve actually tasted it.

5) I have tasted it so I am allowed to deride it. The radler isn’t very good. There’s the usual cardboardy flavour of most mainstream lagers before the fake lemon flavour rides in over the mid-palate. I got two bottles in the media kit and I don’t have any interest in drinking the second one. But that’s okay, I’m not the target market for this product anyway. As the release claims, this is ‘‘a perfect choice for those who don’t normally drink beer’’.