So, Patrick Stewart, BrewDog have teamed up with Weihenstephan to brew something called an India Pale Weizen.
Here’s what it looks like. 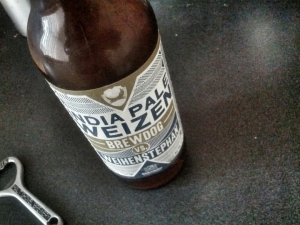 It takes a hefeweizen and tries to turn it into an IPA.  Or, as the label says “a classic hefeweizen hopped like an IPA”.
What do you think of that, idea Patrick?

The label also sees BrewDog describe their hop contribution as “..turbocharged with the flagship flavour of a firebrand craft brewer”. What does your mate think of that wankspeak from BrewDog, Patrick?

So, Patrick, what if I were to tell you BrewDog has butchered this beer? That it tastes like a mistake, like a hefeweizen got infected?

Anyone else on board feel the same way, Patrick?

Time for something chilled after a day filled with protesting kooks.