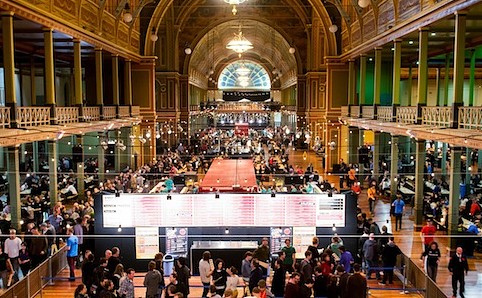 The Royal Exhibition Building in Melbourne – home of GABS later this month.

In case you’re interested, here is my list of 10 beers I have to try at GABS – in alphabetical order in case someone from Two Birds gets cranky about being last on the list>

But it should also be said these aren’t the only beers I’ll be trying at GABS, just 10 of those I’m most keen to have a crack at.

1) 4 Hearts Brewing – Wabbit Saison: Sometimes at GABS, there is a beer that I find impossible to imagine how it might taste. BrewCult’s Acid Freaks Balsamic Porter of a few years ago was one example. This beer from Ipswich’s 4 Hearts is another. It’s made with carrots, for Christ’s sake. How do you make a beer with carrots? What does it taste like? I have no goddamn idea. Which is why it’s on my list.

2) Akasha Brewing Company – Fire Within: To say Dave Padden went all right as a brewer when he was at Riverside would be quite the understatement. He made some very good beers – including 777, the one that got all the geeks hot and bothered.
He’s now started up Akasha and this represents my first chance to try one of his new brewery’s beers. So looking forward to that. But at 8.5 per cent, I think I’ll be trying a sample rather than a full glass.

3) Bacchus Brewing Company – Atomic Lemon Lime and Bitters: Ross Kenrick from Bacchus never disappoints at GABS. Whether it’s a beer that tastes like rocky road or another that tastes like white chocolates and raspberry.
He’s stepped away from the dessert angle and opted to release a new beer in his Atomic sour series. This one is Atomic Lemon, Lime and Bitters, made with real lemons, limes and blood oranges. And it’s only 2.7 per cent, so I can drink a whole glass of it without worrying about getting too drunk.

4) BrewCult – Milk and Two Sugars: Hendo’s other GABS beers have been great. That balsamic vinegar porter? Awesome. So his beer’s obviously going to be on this list. It’s made with cold-drop coffee and vanilla beans, which sounds like it tastes great

5) Bridge Road Brewers – Creek: Does Bridge Road ever release a bad beer? Nope – and that’s more than enough reason to have them on the must-try list. This one is a cherry lambic – and who doesn’t like lambics? Nobody, the answer is nobody.

6) HopDog BeerWorks – Taxidermied Pachyderm: It’s a Belgian and brewer Tim Thomas does these so well. But as well as a Belgian it’s also a rye beer, a brown ale, a barrel aged beer and an IPA of sorts. WTF? Also, Tim is the only brewer from my neck of the woods with a festival beer at GABS this year. So I have to try it out of loyalty.

7) Modus Operandi Brewing Company – L90: They won stacks of awards at last year’s Craft Beer Awards and I tried their beers that night and they were the standouts for me. This is a big 9 per cent imperial IPA made with mangoes and honey.
Definitely want to try this but, again, it’ll be a sample rather than a full glass. That 9 per cent alcohol count could be dangerous in a full glass with so many other beers to try.

8) Pikes Beer Company – Tonic Ale: It’s just 2.3 per cent so it won’t take up too much ‘‘alcohol’’ space in my GABS drinking plan. But the attempt to make a beer that resembles tonic water is hard to go past. Hopefully it’ll be a bit warm at GABS, because this will go down a treat.

9) Red Island Brewing Company – Quiet Deeds Smoked Hefeweizen: I wanted to try this beer from the moment I read about it in their Beer is Your Friend GABS Brewer Q&A. I love hefeweizen – it’s my favourite style – and to offer up a smoked version really pricked up my ears. And my taste buds.

10) Two Birds Brewing – Pina Colada: These guys were responsible for one of my favourite GABS beer – Taco. That was the beer that led to me writing a wussy open letter begging them to put it in bottles. They did that – but I don’t take any credit for that. I reckon it was happening before my letter.
This year’s offering is mean to resemble a pina colada – so it’s an IPA with pineapples and coconuts. I have no idea what a pina colada tastes like, but this is a must-try.