Robots and bears and a hypocrite

So why is bear sex okay but not robot sex?

Okay, perhaps I need to go back a bit.

Yesterday on Twitter, I saw this beer label from Stockade Brew Company in western Sydney.

It’s a legit label too because it was tweeted by the brewery itself. It really put me off.I felt it crossed a line – sure they’re robots and not actual people, but still, they’re anatomically explicit enough to remind us of real people. It’s a label that made me uncomfortable. And I don’t know why any company would want to pursue a path that risks making customers uncomfortable.

I guess it could have made me feel even more uncomfortable given one of the other options Stockade had. They put the label art out to an online design company with a brief and then they get back a stack of designs and choose their favourite. One of that also made the shortlist was even more off-colour than the winner. 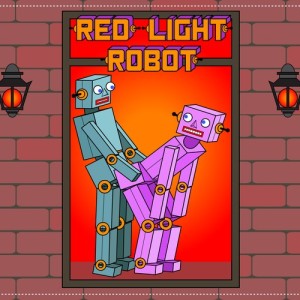 See what I mean? (note; I’m not saying the art is terrible but rather the use on a beer label).

And so I spent most of yesterday morning, churning up my outrage in preparation for a blog post about cheap and tacky labels, blokey efforts like this that tend to overlook the large craft drinking population that are female. That it sets our industry back.  I was going to go for it. Totally

And then I remembered this beer label from Big Shed.

One I’d seen quite a few times in the last six to 12 months and not once – NOT ONCE – did I go, “oh jeez, look at that. Those bears are fucking. On the beer label. I’m disgusted. I must write an outraged blog post”.  In fact, I don’t even think I realised what the bears were doing the first time I bought the beer. Then, when I did, I still didn’t draw the connection with the “Californicator” beer name (yes, as has been established repeatedly on this blog, I am an idiot).

So why did the rooting robots offended me but not bonking bears? (see? Alliteration – that’s the sign of a fancy beer blog). Sure, part of that would be down to the fact that my nickname is Bear and therefore I always take their side on any issue. But beyond that, I don’t have a clue. Look at the labels. Aside from the angle of the viewer, they’re both pretty much doing the same thing in roughly the same position. And they’ve both got similar facial expressions (And I might be looking at these images a little too closely). In theory I should be unimpressed by both of them. But I’m not.

So how much of a hypocrite does that make me? And why am I writing about robot and animal sex? I’m an award-winning beer writer, for God’s sake.