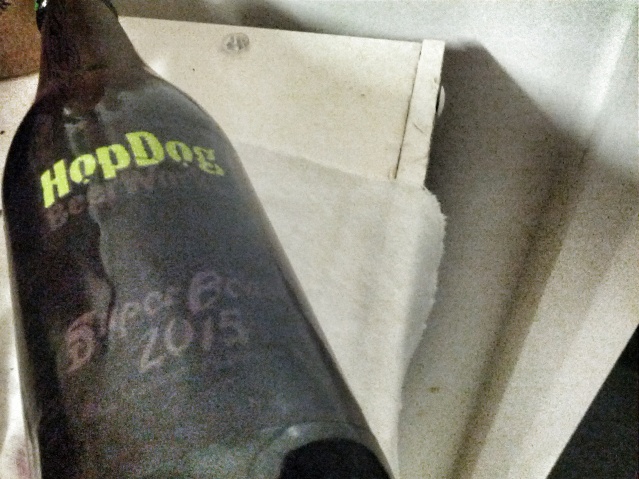 1) HopDog BeerWorks and I go way back. All the way back to September, 2011, when I’d just started writing beer reviews for the local paper and Tim Thomas had just opened his joint a month ago. In fact, it’s possible that September 2011 review was the first anyone had written about the brewery (yep, I got in waaaaayyy before all you hipsters).
It wasn’t the last review either. Tim sticks all his beer reviews up on a wall and, because a lot of them seemed to have my byline on them, it became known as ‘‘the Glen Humphries wall’’ for a while. I haven’t been down for a while to see if it’s still there – partially because it’s more than a two hour return trip for me and partially because I’m a lazy bastard.

2) So every year in August, Tim brews an anniversary beer known as SuperBeast. The style can vary – it’s been a wheatwine, a peated barleywine and more straightforward barleywine. I was a fan of all of them – except the one with peat. I hate peat. This one is a mix between a Black IPA, imperial porter and a black barleywine.

3) But one thing is always the same with SuperBeast – it’s big on alcohol. The lightest one so far clocked in at 10 per cent. This year’s iteration finishes at 10.5 per cent and brings with it 100 IBUs. But if you’re expecting a big, boozy, bitter monster, guess again.

4) Yep, as strange as it may sound, this doesn’t taste like a high-alcohol beer. Or a crazy bitter one either. This is a 10.5 per cent, 100 IBU beer that’s dangerously drinkable. It throws off delicious fruit at the front before coffee notes fold in through the mid-palate. At the back end, it all combines to create a wonderfully balanced beer. And I’m still gobsmacked as to how Tim hid all that alcohol.

5) I’m not a fan of the writing on the label. Grey writing on a black background is insanely difficult to read. I had to bring my bottle into work and tilt the bottle around under the strong office lights so I could read it.

Free or paid for? I bought this at Crown West Cellars. And have since bought two other bottles as well.