History in a Bottle #4 – Who the hell is Kosciuszko? 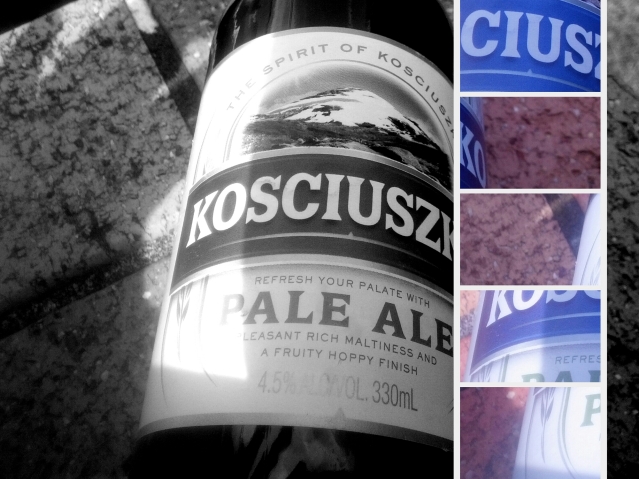 Kosciuszko Pale Ale comes from a 600-litre microbrewery started up by Chuck Hahn in 2009. It’s in the Banjo Patternson Inn at Jindabyne. Though, to be honest, I’m pretty certain all the bottled product is brewed elsewhere. Six hundred litres at a time isn’t really enough for a brewpub and a bottled range available all over the place.

Obviously, the name of the beer and brewing come from Mt Kosciuszko, the tallest mountain in Australia. Yet that mountain wasn’t named for the man who discovered it. In fact, the man it was named for never saw the mountain.

He also never set foot in Australia either. Yep, our tallest mountain is named for a man who never visited Australia.

The man the mountain was named for is Tadeusz Kosciuszko (1746-1817) – a hero in Poland and well-remembered in the United States too. The name for the mountain was chosen by fellow Pole and explorer Pawel Strzelecki, who climbed it in 1840 – just a year after arriving – and named it in honour of his home nation’s hero (Strzelecki would later get his own mountain – in the Northern Territory. A part of Australia he, rather appropriately it would seem, appears never to have visited himself).

Incidentally, he may have not climbed the highest mountain in Australia but the second-highest (I’d include a footnote here like Phil Cook does so well, but do you think I could work out the HMTL to do that? No I could not. So just look for the asterisk at the bottom of this post).
Kosciuszko the man He studied at the Warsaw military academy but, when he fell in love with his boss’ daughter and tried to elope, dad had him beaten up.

That prompted his flight to France, and ultimately the United States where he got tied up in the American War of Independence. He soon was granted the rank of colonel, the US leaders keen to use his knowledge of engineering. To that end, they got him to devise the fortifications at a range of places, including West Point.

He saw no action until the final year of the war, where he became involved in some small skirmishes. That changed after the war ended and he returned to Poland. Russia invaded his country. He went into the field to defend his country and won every battle he fought in until the king surprisingly gave into the Russians.

READ MORE: History in a Bottle #5 – Random Breath Testing
That sat poorly with Kosciuszko who became part of a group hellbent on ending Russian rule in Poland. The uprising that bears his name was an undeniable failure, both for the Polish people – the Russians massacred thousands of them – and for Kosciuszko – who was wounded and captured.

He languished in jail until the death of Catherine the Great saw a change in relations with Poland. The new Tzar Paul I pardoned Kosciuszko who headed to the United States for some years before returning to Europe again and getting into a few arguments with Napoleon.

He died age 71 after falling off a horse – more than 20 years before a Pole named Strzelecki would climb the highest mountain in a country and name it for a man who had never been there.

* There is some confusion as to whether the mountain Strzelecki climbed was Kosciuszko or the neighbouring Mt Townsend. That’s partially because the description of the top of Kos
ciuszko left to us by Strzelecki is said to better resemble Townsend.

Adding to the confusion is the fact the names of the mountains were initially the other way around. People were still told Kosciuszko was the tallest but measurements of both in the late 1800s discovered the mountain labelled on maps as Kosciuszko was the shorter of the two (it’s not as if there is much difference between the two – just 19 metres according to Google).

Rather than face the prospect of re-educating everyone that our highest mountain was now Mt Townsend, the New South Wales Lands Department simply switched the names around.