The Hangman pale comes from The Rocks Brewing Company, who also owns Harts Pub in Sydney’s Rocks. The pub is located on what, in the early years of settlement, was referred to as Gallows Hill, because down the bottom of the hill (about where the Four Seasons Hotel now stands) was a jail where hundreds of people did the ‘‘Paddington frisk’’, one of many slang terms for hanging.

Locals would sit on the hill and watch the condemned die. The hangman the beer is named for was Alexander Green, who saw off almost 500 people in his 27 years working the noose – from 1828.

But we’re not concerned with Alexander here but Thomas Barrett – the first person hanged in Australia, just a month after the First Fleet landed. And, when he was hanged, it was the third time he had been sentenced to death.

In 1782, Barrett was convicted of stealing a silver watch and other items and sentenced to death. That was later commuted to transportation to America and he was placed aboard a ship called the Mercury. But he escaped from the ship when it was taken over by the convicts – then copped another death sentence when recaptured.

That too was commuted to transportation – this time to Australia on board the First Fleet ship Charlotte. He didn’t escape this time, but he did manage to show a special talent. An accomplished engraver, while on the ship Barrett somehow managed to create some forged coins out of pewter spoons and buttons.

This skill had also seen Barrett credited with the creation of Australia’s first colonial work of art. It was the Charlotte medal, an engraving to mark the ship’s arrival at Botany Bay.

READ MORE:  History in a Bottle #4 – Who the hell is Kosciuszko?

However, not long after the arrival on January 26, 1788, Barrett was in trouble again. On February 27, he and three other convicts, Henry Lavell, Joseph Hall and John Ryan, were accused of conspiring to rob the government store. A hastily-convened court of officers found them guilty and sentenced them to hang before sunset from a large gum tree at the base of Gallows Hill. 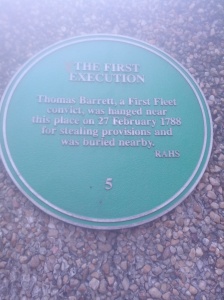 The plaque on the corner of Harrington and Essex streets that marks where Barrett was hanged.

The four men walked to the gallows tree at 5pm. Ryan was cajoled into turning King’s Evidence and was freed – on the proviso he act as hangman for the others.

Then Lavell and Hall got a 24-hour reprieve. But not Barrett – having twice had a death sentence commuted, it was third time unlucky for him.

‘‘Abt. 1/2 after 6 o’clock pm he express[ed] not the least signs of fear,’’ wrote one witness, surgeon Arthur Bowes, ‘‘till he mounted the ladder then he turn’d very pale & seem’d very much shock’d.’’

Perhaps the reaction was because he was facing death, or perhaps it was because he thought someone would intervene and save his life for a third time. No-one did – he was hanged at about 6.30pm. His body dangled there for about an hour before being cut down and buried near the tree.

Today, a green plaque on the corner of Essex and Harrington streets in The Rocks marks the spot where Barrett died.