Beer of the Week – Buggin’ Out 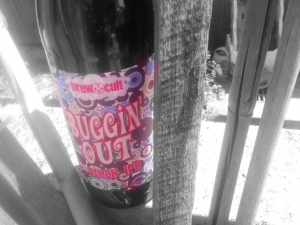 The beer: Buggin’ Out Black IPA.

Where did it come from?: It’s from BrewCult but I got it from Crown West Cellars. I like that place; they’re always looking to expand their good beer range. And I can ask them to find pretty much any beer and they’ll have a real crack at finding some.

What’s it like?: It’s bloody great. Looks like a porter but, with all those delicious pineapple and orange hop characters it smells all the way IPA. There are some choc-coffee flavours floating around just to remind you of the ‘‘black’’ part of the black IPA.

Why do you like it?: Because it’s almost exactly what I want in a black IPA. I want it to look black but have the flavour of an IPA.

Okay, now you can tell the story you think is funny/interesting?: This was kind of a crowdsourced beer. Brewer Hendo was last year’s Australian National Homebrewing Conference. He tells the crowd he’s going to brew a black IPA and asks the audience to yell out what he should use to make it. He writes down some of the better suggestions and goes away to brew it.

Anything else?: Yeah, if you haven’t tried this beer yet, make sure you buy two bottles. Because it’s so good you’re going to want to drink another one as soon as you drain this 500ml bottle.

Found this at home - it's the 2015 vintage of @stoneandwood Stone Beer.