What about the beer, Ken?

BEYOND THE PALE
Ken Grossman,
Wiley 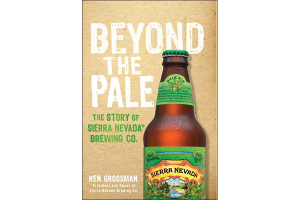 I really wanted to like Grossman’s story about the brewery he founded. How much? So much that I’d planned to run a Sierra Nevada Week here at Beer Is Your Friend, where I’d write about one of their beers daily for seven days and include some snippets from Beyond The Pale about that beer’s origin.

I wasn’t able to do this in the end, because Grossman’s book doesn’t contain a whole lot of detail about the beers he created. Sounds crazy but it’s true. In fact the book is one-third finished before he gets to the stage where he brewed the business’ first beer.

The story starts with Grossman’s childhood, where he talks about his love of pulling various appliances apart and rebuilding them. That love later came in handy when it came time to build his brewery out of spare parts.

But reading his book left me with the impression he’s more interested in building things than making beers. See, Grossman spends a huge amount of time detailing every single thing he tinkered with while building the brewery but then gives comparatively little space to talking about the history of the beers.

That’s what I – and I bet most readers – wanted to read about. Because for most of us, our interaction with Sierra Nevada is through the beer. Fellow brewers may be fascinated with the detailed overview of the Sierra Nevada equipment but I found myself skipping past these pages. And there were just too many pages to skip past.

Grossman’s book is the equivalent of a musician’s biography where they bang on for ages about the technical aspects of their instrument but spend precious little time talking about the inspiration behind their much-loved songs.