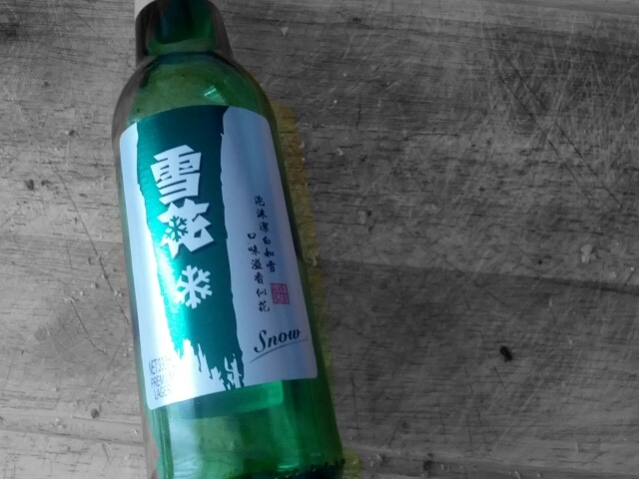 And now, presumably it is in yours as well. I think we can safely say there aren’t many earworms worse than Informer. So any beer that forces my brain to sing this song has a black mark against its name straight away. A licky boom boom down? Oh fuck off.

3) Apparently it costs the equivalent of 50 cents a bottle in China. At that price it’s no wonder it sells so much. Also, the Chinese are probably laughing their heads off that those stupid Australians are paying almost seven times the price for a bottle. Presumably because it’s being sold as an imported premium lager. I guess turnabout is fair play – we’ve been letting the rest of the world think we drink Foster’s for decades now.

4) The beer itself comes in an oddly shaped bottle. It feels taller and thinner than most beer bottles we get here. The aroma is of sweet malt and a hint of wet cardboard. Flavourwise, it’s stronger than a lot of the lagers we have. But that’s a blunt sort of strength – like the malt overpowers and overbalances the rest of the beer.

5) I’m sure the average beer drinker wouldn’t have a clue that Snow sells more than any other beer. To them it’ll be just a beer with a label written language they can’t understand. And at a price greater than it deserves. So I wonder if it’ll sell very well here at all.

With all the talk about the 30th anniversary of Nirvana's Nevermind, it inspired me to go back and re-read this classic oral history.