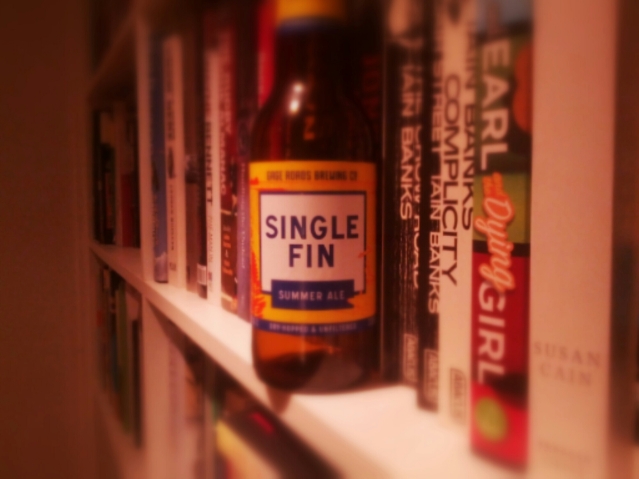 1) Yes, Single Fin is a summer ale and, as it’s winter right now, we’re technically as far as we can get from summer. I’d meant to write about this beer for a while but just didn’t get around to it. Yeah, I can be slack. But really, tell me you don’t drink summer beers during winter, or neck a few stouts over summer. Of course you do. So stop complaining (if you weren’t complaining, move straight onto Point #2 and we’ll forget all about Point #1).

2) It’s made by Gage Roads. Which means it’s a Woolworths beer. Consider yourself warned Mr I Don’t Drink Beer Made by Supermarket Chains. And I hope you don’t buy any other foodstuffs made by supermarket chains either. Because, hey, those products hurt the little guy too.

3) Okay, now I don’t let the idea that a beer is made by a supermarket stop me from enjoying a beer. It’s not cool to like Coles’ Steamrail beers but I’m an unrepentant fan of their GoldDigger golden ale. And I really like Gage Road’s Single Fin too. There’s some light fruit notes – mainly peach – lying on top of a easy malt bed. If it were summer this would be very refreshing. So maybe turn on the heater at home for a few hours so the room is really hot before trying it. You know, to get the full effect.

4) The label says it’s ‘‘chock full of Galaxy and Enigma hops’’ but I would question Gage Roads’ definition of ‘‘chock-full’’. Because I didn’t really get any strong hits of either hop; this beer certainly doesn’t resemble that Galaxy benchmark of Stone & Wood’s Pacific Ale.

But it’s possible that Phil Cook provided an explanation for that on a recent podcast. He suggested the Galaxy S&W uses comes from Tasmania while almost everyone else gets theirs from mainland hop farms. His suggestion is that Galaxy’s flavour and aroma could be affected by terroir – the location they’re grown. Makes sense to me.

5) With that in mind, what would be great is if S&W released a version of Pacific Ale made with mainland-grown Galaxy. That way we could gauge what effect the soil really does have.