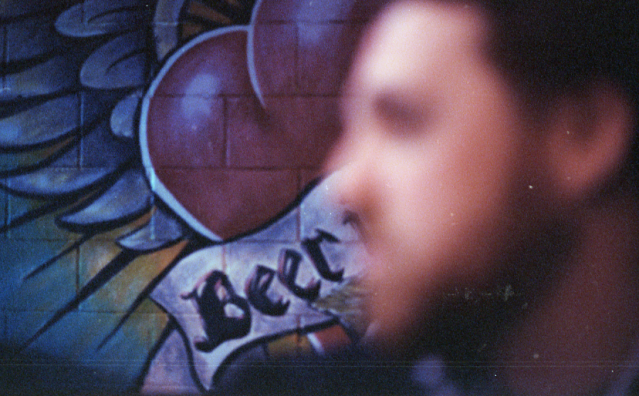 Why do you do it?
The reasons have shifted quite a lot over the years. My Diary started as a memory-aid, and its online incarnation was originally just a searchable resource for myself. But then the stories and occasions themselves crept in more and more, as did the various rambles and rants that beer can inspire and which were usually just directed at friends and strangers in the pub. That’s the real fun of it, now; I love beer and its surrounding culture and community — I just find peculiar details particularly engaging or enraging, and I like trying to share both with other people.

What else have you got going on in your life?
Enjoyably little, actually. I recently gave up my day job (at Garage Project) to go back to bartending (now at Golding’s Free Dive), which gives me back most mornings (valuable, for a nocturnal person). I live with my lovely girlfriend and our excellent cat in a charmingly crummy flat where there’s always gardening to be done and bike rides to head out on. Books and video games soak up a lot of downtime very nicely, too.

What makes you keep writing if you’re not getting paid for it?
Well, I wouldn’t object to getting paid for it. So I suppose there’s always an element of practice / manifesto / portfolio in putting unpaid-for stuff out in the world on spec. But really — and this’ll tie a previous question and an upcoming one together nicely — I find it fun, as a quiet and relatively-solitary hobby, and I often just have something I want said, especially if I can point to something I think is going under-noticed.

What’s one of your blog posts that you like the most?
For various reasons, I basically wound up taking the last twelve months as a “year off” from writing much, though I did manage to come up with an unusually-balanced (I thought, for me) piece on a Stone tap takeover, and an admittedly-ranty review on a really bad beer that was almostly certainly disaster for normal people as much as for us nerds. And, going further back into history, I’m always pleasantly surprised by the enduring appeal of my reaction to the god-awful Moa share-float IPO; I still see people sharing that around to explain to their friends why they don’t buy that brewery’s stuff — which is always welcome reassurance that I wasn’t alone in my outrage. I’m also hugely proud of the podcast we’ve been doing for a while, but most of the credit for that should go to my producer / co-host George and our various excellent guests.

One tip about beer blogging that you’d like to share?
Say something. Just have an opinion and voice it, whatever it is. Declare your biases and whatever might look like a conflict and then just say something. A lot of writers — myself included — started out with relatively dry tasting-note style stuff that tries to be somehow objective or merely descriptive. Which is a doomed project, and quickly grows tiring — to write, and to read. You’ll never be able to describe how something “actually” tastes, thanks to the intractable Problem Of Other Minds and that fact that doing so would be bolted to a particular set of circumstances anyway. I want to read stuff that reacts, somehow. All the best writing is more or less gonzo, because you just can’t separate the drink from the drinking and the drinker.

The phrase ‘‘craft beer’’ – love it or hate it?
Both, really. I’ve learned to live with it, and acknowledge its use in talking to non-nerds. Any hope of a satisfactory definition is utterly dead, and marketing departments have rendered it almost toxic anyway, but despite all that it still quite-obviously means something. There absolutely are less-problematic options we should eventually switch to, but none of them (yet) have the currency. I’m definitely sympathetic to the idea that good, honest beer-with-flavour-in-it shouldn’t be required to wear an adjective; it should just be “beer” — let the blandified, commercially weaponised stuff be saddled with the extra word, like “pop music” is. But that’s a far-off utopia.

One thing that still surprises you about the beer scene?
It’s inventiveness. Sure, a lot of creativity is driven by the need for a gimmick in the modern market, but underneath all that it’s still astonishing that people are finding new ways to make beer, serve beer, build bars, and talk about drinking. We’ve been doing all of these things for hundreds of years, and we’re evidently not finished. That’s bloody neat, that is.

And one thing you hate about it?
Snobbery. Which usually just boils down to failing to recognise the subjectivity of experience and the fact that peoples’ tastes just differ. De gustibus non est disputandum and all that. Too many people — writers, retailers, brewers, etc. — mistake their own preferences for “what’s good”, which leads to all sorts of dead-ends and misallocated passions and unpleasantness.