Beer of the Week – Uberbrau 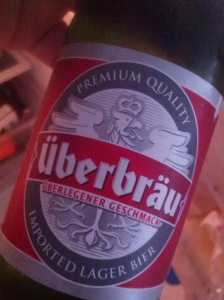 The beer: Uberbrau (There should be umlauts over the first U and the A but I don’t know how to do those). It’s a lager.

Where did it come from?: I got it from a First Choice Liquor outlet, but it originally comes from Germany. Via Australian Beer Connoisseurs, which equals Liquorland, which equals Coles.

What’s it like?: To be honest, better than most other mainstream lagers. There’s a malt aroma with a smidge of wet cardboard and the flavour is of sweet malt (almost honey-like) with a bit of bitterness at the tail-end.

Why do you like it?: Well, I wouldn’t say I like it, because I’m not going to buy it again. But if I was somewhere and it was either this or VB or XXXX I’d probably pick the Uberbrau

Okay, now you can tell the story you think is funny/interesting?: I picked this up figuring I could have some fun tearing into the beer on this blog. Partially because it has a name that sounds like it should be in some tacky low-rent movie comedy about a brewery (‘‘Uberbrau. For when you have a big thirst’’) where they put some woman in a German beer wench outfit for no good reason.
And yet it surprised me. Not in a ‘‘jeez, I’m going to buy so many cases of this that I’ll be able to use them as bricks in a cardboard house’’ way. More in a ‘‘smart-arse blogger let his preconceptions get the better of him’’ way.

Anything else?: Yep, Uberbrau is ridiculously cheap. This bottle cost me $2 and you can get a six-pack for $10. A case will set you back just $30. So if you view beer as nothing more than an alcohol delivery device, these prices are astonishing. Why don’t they make good tasty beer and sell it that cheap? Probably because the geeks wouldn’t buy it. (‘‘It’s $2 and comes from a supermarket. It must be crap’’.)