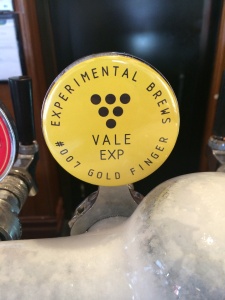 Head Brewer Jeff Wright said the ‘Goldfinger’ Golden Ale is complex and sophisticated, not unlike Mr Bond himself.

“Goldfinger is all about citrus flavours and aromas, set against a background of subtle melon andspice,” Jeff said.

“Golden in the glass, expect a moreish lemon-inspired note of bitterness within this smooth and stylish brew. We’ve used Enigma hops, which are new from Hop Products Australia and offer a mysterious fruity character which mingles seductively with the international tang of the Japanese Sorachi Ace.

“The mouth feel is light to medium and well rounded, thanks to a bucket of Vienna malt and a couple of good handfuls of wheat.”

Gold Finger is the seventh EXP brew from McLaren Vale Beer Company, each of which are available for a limited time on tap only in selected venues.

Further venues will be listed on http://www.facebook.com/MVBeer.