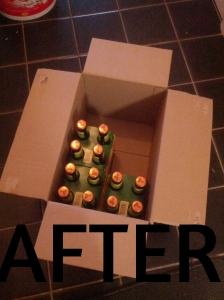 When you undertake an experiment, you don’t measure it in terms of success or failure. What you should be doing is taking a hypothesis and testing it to see what happens. That’s right, you’re not trying to make a certain thing happen, you just want to see any thing happen.

Which is why I didn’t fail in my attempt to drink a case of beer sequentially. I may be posting this on Sunday, but I actually stopped the experiment on Friday. Well, that was when I officially stopped it.

Unofficially, I stopped it when I went to lunch with some work colleagues and ordered a Young Henrys Hop Ale without thinking. In fact, I didn’t even realise what I’d done until about eight hours later. For a day or so afterwards, I chose to cover it up and pretend it didn’t happen (besides, none of my blog readers were at that lunch so the truth would never come out). But then Friday came and after two bottles of the experiment beer – Alpha pale – I went ‘‘ahh to hell with it. I’m not doing this any more’’.

So what did I learn from this experiment? Maybe that I’m a fickle bastard. But I tend to see it as proving my palate just isn’t interested in the same thing over and over and over. Hell, it was a desire to avoid that which made me serious about good beer in the first place.

The wife and I used to like sharing a bottle of wine on a Friday. But she soon fell in love with Marlborough Sav Blancs and would buy them all the time. A few weeks in a row of that and I just got sick of ‘‘cut grass and passionfruit’’ and so decided to buy a few different beers instead.

What this experiment proves is that I need variety. But it also proves that I should drink beers like Alpha more often. By ‘‘beers like Alpha’’ I mean, the run of the mill everyday beers that are easy for you to find and so you overlook in favour of something new. The whole familiarity breeds contempt thing.

The first two Alphas I had as part of this experiment I really enjoyed. I thought ‘‘man, this experiment is going to be so much fun’’. I had the experience where you think ‘‘why the hell don’t I drink this more often?’’.
The conclusion? I should drink beers I overlook more often. But not 24 of them in a row.