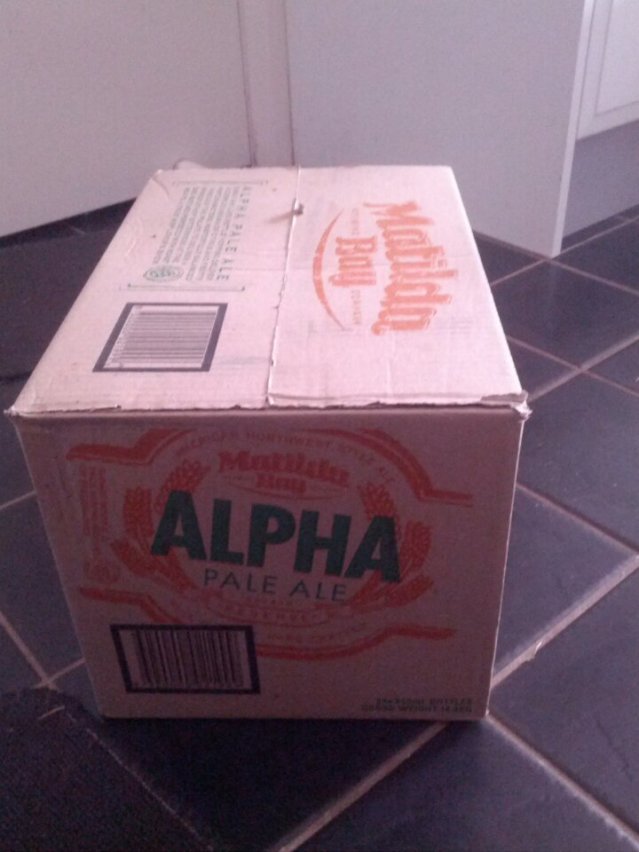 About a month ago I was listening to a podcast by Frozen Summers, the subject of which was drinking a whole case of beer, one after the other. That doesn’t mean drinking all 24 beers in one sitting but rather, every time you feel like a beer, you take one from that carton until they’re all gone. So the next 24 beers you drink are the same, regardless of how long it takes you to get through them.

The idea appealed to me, largely because I found it a pretty scary thing to do. I’m one of these beer geeks who craves variety, who will often buy six different beers rather than a six-pack of one beer. Also, when I’m at home having a few beers, I can’t remember the last time I drank two of the same beers in a row. I’d feel pretty safe in saying it’s never happened.

So the idea of drinking 24 of the same beers in a row was so outside my comfort zone, I figured it was worth a try. It’s also a little unnerving in that the case acts as a very clear tally of just how much you drink. If you go through a number of different beers on a Saturday night, there is no half-empty box telling you just how many you knocked back. You’re not looking at a box and going “shit, it’s half-empty and I only bought that four days ago”.

I try and stay on the weekday wagon, which means only drinking between Friday night and Sunday night. I’m thinking this Case Challenge might force me to stay on that, because I don’t want to get to next Saturday and find the case is almost all gone.

One thing i didn’t foresee in all this was just how hard it would be to pick which case I would be drinking from start to finish.

It can’t be too light: I thought about Stone and Wood’s Pacific Ale, because it is a nice beer. But I was unsure that such a delicate beer would reward 24 straight drinks. I felt like whatever beer I went for had to have a bit of heft to it. Also, while I like the Pacific, I find it does have a lot of carbonation – I didn’t know if drinking three or four in a row would result in me feeling bloated.

It can’t be too heavy: Drinking one beer this many times, I didn’t want to go for something like a stout because that seemed like too much heavy going. I didn’t expect I would much enjoy slogging my way through 24 bottles of Sheaf Stout, which was one option I was considering. And buying a case of Chimay or a barley wine was just too stupid for words.

It can’t be too cheap: Sure, I could spend $30 and buy a case of some no-name lager from my local Liquorland but it would be a false economy. Any money I saved would be massively outweighed by the severe displeasure of drinking 24 crappy beers.

It can’t be too expensive: Really, I don’t need to buy a case of beer; I’ve got enough beers to tide me over for a while. So I wasn’t into blowing $90 or more on a case for this experiment.

My wife can’t like it: From time to time my wife will ask if she can have one of the beers in the fridge. Which is normally fine, but would cause problems with this experiment. I need to drink the whole case, not 23 beers or even 22. So the case I chose would have to be full of beer she didn’t like. Which again meant Stone & Wood’s Pacific Ale was out.

I have to be able to find a case of it: I was thinking of using a case of Beechworth Pale from Bridge Road Brewers. It’s a beer I love and knocking back two dozen in a row wouldn’t have been a problem at all. But do you think I could find a case of it? Nope. In fact all the bottle shops in town were light-on for cases of good beer. Mainstream stuff like Fourex Gold or Tooheys New we’re easy to find, but not good beer. Which leads me to the conclusion that good beer drinkers don’t drink by the case, we do it by the six-pack or more likely by single bottles.

At the end of the day I went for a case of Matilda Bay’s Alpha Pale Ale. It wasn’t too expensive, it had enough heft to stand up to drinking 24 of them. I liked it, and I’m pretty sure my wife doesn’t.

1) I have to drink all 24 from that case. I can’t do 23 and give someone an Alpha. Nor can I substitute any with a single bottle of Alpha bought from the shops. Nope. All 24 bottles will come from that box you see at the top of this post.

2) No other beers will be drunk until that box is empty. That includes beers on tap at pubs, bars and breweries. The only beer I drink are those Alphas. And if I get invited to a BBQ then I take some of those Alphas with me.

3) Experimentation is crucial. Try pouring Alpha into different glasses and see what the flavour and aroma are like. Try one straight from the bottle. Try one outside on a hot day. Or inside on a cold night.

Number three is the big thrill in all this for me. Twenty-four straight is something I’ve never done before, so it means I’m bound to discover something I didn’t know about beer. Maybe by drinking the same beer over and overt, I’ll start noticing things about it that I never spotted before. Maybe it’ll hone my senses a bit as I spot different aromas and flavours. Maybe drinking 24 in a row will make me so sick of Alpha that I never want to see another bottle again.

Who knows? Well, I guess I will in about 20 more bottles’ times.