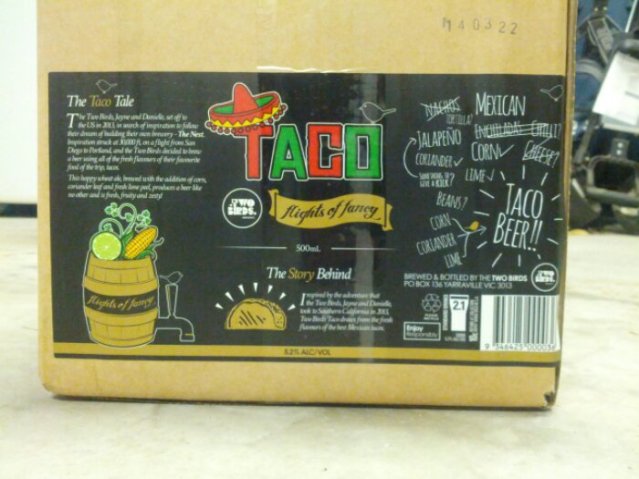 What you’re looking at in this photo is a case of Two Birds Taco. Or perhaps it’s destiny. Allow me to explain.

A month or so ago I wrote an open letter to Danielle and Jayne at Two Birds, in which I begged them to bottle Taco – their super tasty GABS beer from last year. If they did I promised I would buy a case of it as soon as it came out.

While I am a man of my word, I figured that it would actually be almost impossible to actually fulfill my end of the bargain without going to extreme measures. See, I didn’t expect Taco to find its way to Wollongong so I’d have to hunt it down, most likely making a special trip up to Sydney or paying a premium to have a case mailed to me from a beer store. That is if they even had a case they could sell me – I haven’t been the only one crying out for bottled Taco. It was sure to be snapped up quick once it hit the ground.

But wait. I was headed to Sydney today to take my daughter to see her cousin. As fate would have it a well-stocked bottle shop by the name of Barnys was nearby. Win. But they said they wouldn’t have any in stock today. Lose.

But Dani Allen saw those tweets I sent to Barnys and emailed me with the news that Barnys would be getting some Taco. Win. But it was doubtful it would arrive on Tuesday before I got there. Lose.

So I got to Barnys, pretty much resigned to the fact that they wouldn’t have any Taco in the fridges. And they didn’t. I even asked the guys if it had come in and they said, “oh, you’re that guy on Twitter” and then “No”.

Now, you’ll think I’m making this bit up but I swear it’s true. As soon as the guy said “No”, he turned to the front door to see a delivery guy. With two cases of Taco on his trolley. Unbelievable. Or, as I like to think of it, destiny. If I’d have left the store a minute earlier with my other beery purchases, I would have missed the Taco altogether. But I didn’t.