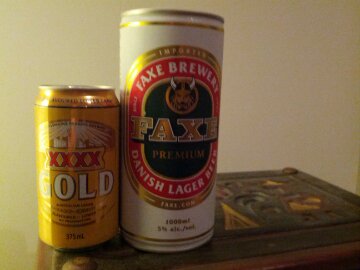 The one-litre can of Faxe, with a normal-sized can of Fourex Gold provided for scale.

Slowly, slowly, canned beer is making a bit of a comeback. Which is a good enough reason for me to create Canned Beer Week.

If you’re pretty dim, that means I’ll be reviewing a different canned beer every day this week and the idea will be to make them a bit interesting. So that means it won’t be a week featuring mainstream offerings like VB, Tooheys New, Fourex Gold and other less than impressive beers. Though I have to admit one that falls into that category will make an appearance; only because I’ve never had it before.

But it surprised me by tasting better than terrible. Certainly better than a few mainstream lagers I could mention (cough, cough, Crown Lager, cough, cough). Okay, I’m not going to buy another can of the stuff but I did somewhat enjoy the nice postage stamp gum flavour the hops gave it.

Which is a surprise given that a lot of mainstream lagers do their best to taste like nothing at all. I was honestly expecting to drink half a glass of it and pour the rest down the sink but I ended up drinking the whole can.

Now that's a fancy kids menu. No nuggets to be seen.