The myth of low-carb beer 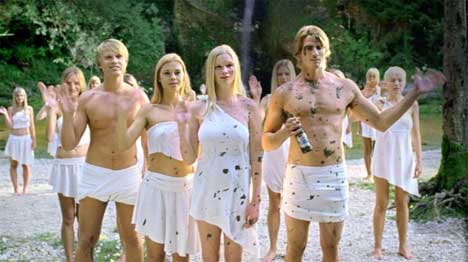 Waving goodbye to the idea that low-carb beer helps you lose weight.

A few nights ago I drank a Pure Blonde. I knew it was not going to be a revelatory experience. I knew it would taste more dull than I remembered because my palate has been spoiled by drinking so much good beer.

I drank it because I had a six pack I’d been sent sitting at home and I had a burst of perverse curiosity (and a little bit of ‘‘hey, that could be a unique check-in on Untappd’’). I also drank it because one day last week I had two people independent of each other tell me that they chose to drink Pure Blonde because it was low carb and therefore didn’t make them fat.

I informed one of them that low-carb beers are a myth and, in terms of weight loss, make about as much sense as a person ordering a Diet Coke to go with their large Big Mac meal. But I decided to look into it a bit further just to see how much of a myth they are.

See, I’ve always thought they were dodgy because of the nutritional information panel they all seem to have. That’s the one that tells us how many kilojoules and calories are in the beer. I figured them to be dodgy because not a single full-strength beer has the same panel. I deduced that could only be because the breweries don’t want us to be able to compare the calorie count of a full-strength beer to a low-carb beer and see a negligible difference.

The low-carb beer market is a nice little earner for the breweries in these more health-conscious times. So they obviously don’t want to kill the fatted calf and allow us to see that low-carbs beers really aren’t that different in terms of calorie counts.

But what are the calorie counts of various beers? For this information I went to www.calorieking.com.au, which lists the calorie count on heaps of stuff. For instance, the 355ml bottle of Pure Blonde I drank has 107 calories. For the sake of comparison, here’s a list of some other beers and their calories;

Making allowances for the variety in serving sizes, I think we can agree that on average a Pure Blonde has about 30 fewer calories than a regular beer. So fewer calories is good for the waistline, yeah? Well, I didn’t know just how much 30 calories represented, so I went back to the Calorie King and found something worth that much.

So, were you to drink a Pure Blonde low-carb beer instead of a full-strength beer, the calories you’d save would be equivalent to …. just two plain water crackers.
Yep, hardly worth sacrificing flavour for just two water crackers, is it? Which surely proves that low-carb beers are a myth.