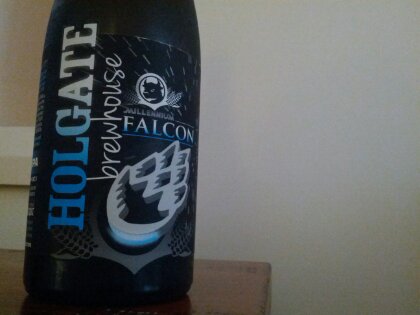 This here is an Untappd-inspired week at Beer Is Your Friend, because it’s Unique Week. That’s where I’m writing about seven beers that will be unique check-ins on Untappd – and they’re genuine uniques as well; we’re not talking about beers I had before I joined Untappd but hadn’t had since (an Untappd rule of mine is I can only check in beers I’ve drunk since I joined the website). Nope, each of the seven beers I drink this week will be beers I’ve never had before.

Part of the inspiration for this stems from the fact that my first Untappd anniversary is coming up next week and I felt this was a way to boost my tally of unique check-ins for the past 12 months. And also, it seemed like it might be a bit of fun.

So I decided to kick off Unique Week with something special – the Millennium Falcon limited release from Holgate Brewery in Victoria. It’s a beer they made to celebrate their 1000th brew and also a beer they allowed the public to name on Facebook. I was perhaps just the second person to suggest Millennium Falcon as a name – which doesn’t make me a naming genius. Hell, with a beer that’s got Millennium and Falconer’s Flight hops it doesn’t take much of a brain to come up with Millennium Falcon. Wouldn’t surprise me if the guys at Holgate had already come up with that name themselves.

I was excited to try this beer because I’m a fan of the work of Holgate (and not because of any Star Wars geekery. I actually don’t understand why grown men still obsess over movies they saw when they were kids. Especially not to the extent where they debate the merits of Jar Jar Binks and whether Disney will wreck Star Wars. Umm, guys, you do realise that they’re films for kids, right?).

I’m on the record as saying Holgate is one of the finest breweries in Australia, and the Millennium Falcon hasn’t let me down. It’s a whopping big beer – 10 per cent alcohol and 100 IBU from those Millennium and Falconer’s Flight hops – and the ubiquitous Galaxy as well. That size allows the brewers a few Star Wars puns – like calling it an “Empirial IPA” and saying it’s a “chewy” beer (like Chewie, as in Chewbacca).

There are some aromas of tropical fruit here and some very strong toffee notes. On the tongue, those 100IBU are immediately apparent, though the beer isn’t overbalanced. That’s because the huge amount of added hops also brings with it lovely fruity flavours like pineapple and passionfruit. And, as is often the case with high IBU beers, your palate acclimatises to the bitterness reasonably quickly and it no longer seems quite so strong. So you’re left with the delicious fruity flavour – and that 10 per cent ABV, which I was reminded off a third of the way through my pint of this (poured from a 500ml bottle).

I really enjoyed this, which means either my palate is getting more used to highly hopped beers or Holgate have made one finely balanced beer. Given the high-quality of the Holgate output, I’m going with the latter.

Would I drink it again?: I probably would. The only reasons I’m not definite about it is that, with a $20-something price tag, it’s more of a special treat beer for me than something I could buy several of.