Homebrew in a flash

The three hops additions for the South Coast IPA.

It’s been a busy time here at Beer is Your Friend, what with the recent month-and-bit of the GABS Brewer series as well as working on something planned for next month. So busy in fact that I’d forgotten to mention that I’d put down another homebrew. I wasn’t supposed to because my last brew – Hopless Cause – was supposed to fill all the empty glass bottles I had. But, due to a possible high finish to fermentation and concern about bottles going kabloeey, I opted to bottle in the much safer plastic.
Which also meant that I still had a stack of empty glass bottles that needed filling. After a bit of to-ing and fro-ing – largely because I figured I had plenty of beer already and didn’t need to make any more. But I like making beer so I decided on a new brew.

Also,I wanted to finally use a recipe from the excellent Clone Brews book by Tess and Mark Szamatulaski. I’ve had at least 15 different recipes bookmarked with scraps of paper since I bought the book about six months ago and decided it was 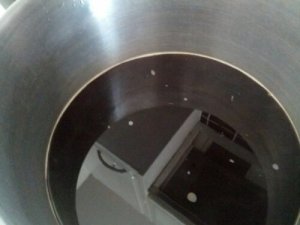 A very badly-taken picture of the wort prior to boiling.

about time I made one of them.

And so I picked their clone of a fine IPA – Green Flash West Coast IPA. With some minor tweaking to make up for the unavailability of Simcoe and to adjust for my smaller boil volume, I otherwise stuck to the recipe. That meant sticking to my new brewing theory and do what I think is right rather than going this way and that with every piece of conflicting information I’m given.

It’s a brew that also marks the first time I’ve used liquid yeast, which didn’t seem to like being pitched just three degrees over the recommended maximum temperature of 23 degrees Celscius. The result was a fermentation that took more than a day to get started. Never had that problem with dried yeast before – guess liquid yeast is a bit more sensitive.

And the name of this homebrew? That would be South Coast IPA, as that’s where it’s brewed.

Tastings of the hydrometer samples hadn’t filled me with confidence. It seems the same problem as with the Hopless Cause may have befallen South Coast IPA. That is, a less than enjoyable grassy-petrol flavour – it certainly doesn’t taste like a Green Flash West Coast IPA.

Discussions here at Beer is Your Friend with Dereck from Hop Head and Darren from I Dream of Brewery have essentially confirmed what I’d suspected. I can only do a boil of about eight litres and these guys reckon the IPA style might not really enjoy that boil volume. To get around it, the next time I try an IPA – which I don’t think will be for a while – I’m holding off on all but the bittering hop additions until damn near flame-out and then dryhop to buggery.

But right now I need to make a beer that works. Which means steering clear of IPAs.