Some noise over Quiet Deeds 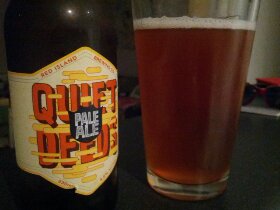 Last month segments of the good beer community got a bit tetchy over comments made by one of the guys behind new pale ale Quiet Deeds.

The beer comes from Red Island Brewing Company (an offshoot of Red Island, the distributor of the sickeningly sweet Rekorderlig ciders. The ciders that appeal to people who want to drink alcohol but not taste the alcohol. Yes, I have a set-to against ciders.

Co-founder Patrick Alè made a few people cross with some comments in an interview with James Atkinson from The Shout.

‘‘We were trying to create a really approachable craft beer that had ‘cut-through’ with its packaging – a modern design, that also had a flavour profile that didn’t alienate three-quarters of the population,’’ Alè said.
‘‘I think that’s one of the pitfalls of a lot of these craft brewers. They focus too much on the equipment and not enough on the actual brand, the packaging, the story, and getting the distribution right.’’

Some didn’t take too kindly to the suggestion that some brewers don’t devote enough time to non-beer making issues such as marketing and distribution. Which I found hard to understand. He’s not saying that every single brewer gets it wrong – just some. Seemed as though people were outraged that someone ‘‘not in the industry’’ dare suggest that some brewers could be doing a little better. Would the reaction have been the same if someone ‘‘in the industry’’ had voiced the same concerns?

Anyway, living in Wollongong, I can say that the issues of branding, marketing and distribution do matter. Maybe it doesn’t matter so much in places like Melbourne, where there is already a large collection of drinkers wanting good beer and so any new product doesn’t really need a big sales push there.

But in Wollongong these things matter. See we don’t get anywhere near as many beers as places like Melbourne, which is a distribution issue. Those that do arrive will often end up in one of a few bottle shops but receive little or no promotion about that by the brewer. Not even a tweet saying ‘‘hey, Wollongong people can get our beer at such and such bottlo now’’. That’s a marketing issue.

And as for branding, well, I really like a great-looking label. If I’m in a bottle shop and I see several new beers you can bet your arse the one I’m picking up first is the one with the most eye-catching label.

And I’d pick up Quiet Deeds because I like the 1990s retro style label, which is a damn sight better than some other labels going around. But the critics of Ale’s comments do have a point when they say it’s also about the beer behind the label.

It’d be a safe bet that most good beer geeks won’t like Quiet Deeds. Which is okay, because it’s not made for them (okay, I should say ‘‘us’’ because I’m a beer geek too). There’s nothing fantastic going on here; no six varieties of hops, no incredible depth of flavour – it’s basically an entry level craft beer.

Judging by Ale’s remarks about ‘‘a flavour profile that didn’t alienate three quarters of the population’’, I’d say entry level is what they were aiming for. That market that isn’t interested in macro lagers but finds the full-on things like IPAs a bit daunting. The market that thinks things like James Squire is the apex of tasty beer.

I’m not in that market, which is why I’m unlikely to drink Quiet Deeds again – I simply find it lacking when compared to the other flavoursome beers I drink. But I’d reckon that, for those people, who don’t drink those flavoursome beers, this might go down all right.

And, who knows, it might just be the beer that kicks off the good beer journey for some of them.

Tagged as: pale ale, The Shout