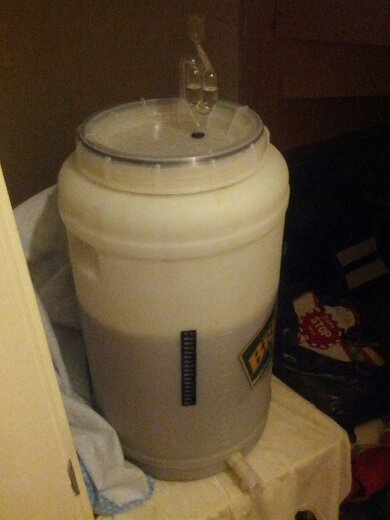 Whenever brewday nears, I started freaking out a little bit. Well, to be honest, the freaking out starts before then – it starts when I begin to work out what beer I’m going to make. So I fret while trying to find the right recipe, then I worry about whether it’s the right recipe. Then I start sending messages out on Twitter asking for assistance.

Then, I decide on a course of action. Then I’ll worry that the chosen course of action is wrong, so I’ll change it. Essentially I overthink every damn beer I make. This is despite knowing that it’s quite hard to break a homebrew (as long as you’re doing all the right things as far as cleaning equipment goes).

This time around I was planning on brewing a double IPA, partially because my homebrews all seem to end up at about 5% alcohol and I wanted to get something heavier. And partially because I liked the Little Creatures Single Batch Big Dipper and wanted something similar.

There were changes to the beer right up to brewday. Went to the homebrew shop on the morning of brewday to find that my selection of hops – galaxy, motueka and centennial – weren’t all available. Only centennial was in their fridge. So my brew turned into a US double IPA, with adding citra and amarillo to the centennial.

Then on the way home I started to worry that the advice I had about the hop schedule was all wrong. Even though it came from a professional brewer. He told me that, rather than the additions at 30, 10 and five minutes, I should just add the bittering hops at the start and whirlpool everything else. Then he had to explain what a whirlpool was as I’d never heard of that before.

After planning on forgetting the whirlpool and then thinking of sticking with it, I decided to stop being such a wussy moron. I figured each brew is an experiment, a learning process and to worry about having things absolutely perfect was just dumb.

So I whirlpooled. And I’ll find out in a few weeks what happened.

The other hassle was trying to come up with a name for the beer. It featured US hops, so I was going for American themes. My family lived over there in the 1980s, so I thought of Chain Bridge IPA (after the residential area we lived in) or Benny Hill IPA (because kids at school called me Benny Hill, due to my accent) but chucked out both.

Then there was Manifest Destiny (check your US history books), Hop Pun (cause all IPAs have hop puns in their names) and Inferiority Complex (a jab at all the IPA names like Hop Monster, Hoptastic, etc etc) but chucked them too.

After a few more crappy name I went with Hopless Cause. Because I was frigging sick of thinking up names.

And because it has the obligatory hop pun.

Tagged as: double IPA, freaking out, Homebrew, hopless cause, US hops