Fellow beer blogger James over at Beer Bar Band has just last month become a homebrewer after a few years of just drinking the stuff. So that prompted me, a homebrewer celebrating his first anniversary this month, to write up this six-pack of tips directed at James and any other newbies.

Does the fact that I’m giving out tips to people mean I think I’m some sort of brewing expert? Oh Christ no. If you wrote down all the stuff I don’t know about bring in a series of books, you could likely fill a library with said books.

Think of this list more along the lines of ‘‘stuff I wish I knew earlier’’.

1) It should be called homecleaning, not homebrewing: The unromantic reality of making beer is most of your time isn’t taken up with the beer itself. It’s taken up with cleaning and santising – fermenters, bottles, bottle caps, spoons, pots, siphons, airlocks and all the other bits and pieces that need nasty germs eradicated from their surface.

Sure, it’s a huge pain in the arse – I hate bottle washing – but it’s also crucial to getting good beer. Screw something up in the cleaning stage and it can cause problems in your beer later. That happens to me with the first brew I made – my wife insisted she could detect a slight chlorine-like flavour in the beer. I couldn’t find it myself but wasn’t impressed with the beer anyway (which was Cascade’s Spicy Ghost, if you want to avoid it).

After thinking on it for a while I realised what had likely gone wrong – after cleaning the bottles I didn’t rinse – I just stood them upside down to drain. For every beer after that first one, I rinsed the bottles and my wife never again complained of a chlorine taste.

2) Australians need to write more homebrewing books: The bulk of the homebrewing resources – books, magazines etc – are written by Americans. Which is fine for Americans, slightly less so for Australians. Firstly, there’s the issue of measurements – they’re all in gallons, ounces and pounds, so you need to change all of them into metric before you can do anything.

Then there’s the equipment. American homebrewers seem to love fermenting in glass carboys – a vessel that seems incredibly ill-suited for the process. It’s made of glass which is incredibly breakable and it has a thin neck which must surely make cleaning a huge pain in the butt (not to mention exclude the option of putting something like a hop bag into the beer). Australians use the much more sensible plastic fermenter – a bucket with a lid essentially. It’s hard to break and the wide top means you can stick your arm all the way in to clean muck off the bottom. 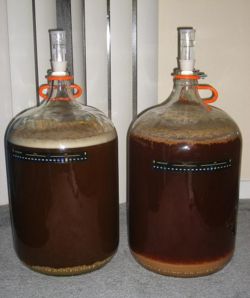 These are carboys and I can’t for the life of me work out why people use them for homebrewing.

Then there’s the apparent obsession with boiling your extract to sanitise it. I don’t get that – the extract has already been boiled. I mean, it’s wort for pete’s sake. Finally, yes, I’m willing to concede that the Americans think we’re weird (‘‘Christ those Aussies make beer in buckets!’).

3) It’s harder than you think to wreck a beer: Provided you’ve followed step one, that is. If you’ve taken a shortcut with cleaning then it’s damned easy to wreck it. I’ll fret about every little detail of the process each time I make a beer. ‘‘Is this too much hops? Should I add them later? What about the mash – is the temperature right? Is that a rolling boil? What the hell is a rolling boil anyway?’’. That sort of stuff.

And yet the beers always work out in the end (well, except that Spicy Ghost – but that was a cleaning error). Yes, some turn out very good while others are just okay but they’ve all been drinkable. As long as you follow the recipe, the beer will likely turn out okay.

4) The internet and Twitter are overflowing with homebrewing geniuses: I mean that sarcastically, of course. Look for guidance on a homebrewing forum and you’ll have people flood you with conflicting advice – and in each case they’re convinced their way is right. As a newbie that really did my head in – how was I supposed to know what to do when people with more brewing experience than me couldn’t agree?

Two things help here – finding someone you can trust and honing your bullshit detector. I’ve had people on Twitter whose advice has always been accurate and I’ve also read tips in homebrewing forums that I realise simply didn’t ring true.

So be aware – there’s a lot of crap out there. Yep, I’m aware what I’m writing here could fit the ‘‘crap’’ category as well.

5) Get a better brewer to help you take the next step: When I moved up from kit and kilo to extract brewing with a mini-mash I was quite fortunate to have a professional brewer living down the road. Scotty, who brews the beers for Hart’s Pub in Sydney, kindly offered to come over to my house and make my first extract brew with me.

Having someone who knew what they were doing and could guide me through the process was invaluable. I’d read heaps of stuff about extract brewing but putting it into practice seemed full of ways for me to screw up. Having Scotty there made me breathe a bit easier and also gave me the chance to ask a stack of brewing questions. He also showed me how to separate the two parts of the fermenter tap, which was quite handy as I hadn’t realised it was made up of two parts.

6) It doesn’t have to be complicated: You’re making beer dammit. It’s supposed to be fun, you’re supposed to enjoy it. If it all becomes too difficult or frustrating, you’re doing something wrong.