The Session #71 – Brewers and Drinkers

The Session is a monthly event for the beer blogging community where, on the first Friday of each month, all participating bloggers write about a predetermined topic. Each month a different blog is chosen to host The Session, choose the topic, and post a roundup of all the responses received. For more info on The Session, check out the Brookston Beer Bulletin.

This session is hosted by John at Home Brew Manual (from whose site I just “borrowed” his excellent home brewing record sheet – I had just the day before been thinking “I wish I had something like that”) and he decided to set the blogging topic of “Brewers and Drinkers” . Essentially it’s about, if you brew beer, whether that has had any effect on how you appreciate beer in general. Or, if you don’t, do you think you enjoy a beer more because you don’t know how it’s made.

This time last year my wife bought me a homebrew kit for my birthday. It wasn’t entirely out of the blue – I’d been developing a taste for good beer over the previous year or so and had been talking about getting into homebrewing for at least that long.

But I never did anything about it, citing the (presumed) high cost of getting started – buying fermenters, bottles and all the other paraphernalia required. And so my wife – bless her wonderful heart – decided to give me a little push. She bought me the kit and a two-hour course on brewing at my local homebrew shop – and I was off.

That was a year and 13 brews ago. I in fact just bottled lucky number 13 earlier this week – a Hoegaarden clone that, in a self-deprecating comment on my brewing skills, I called Sarcasm. Why? Because sarcasm is the lowest form of wit. (geddit? I brewed a WIT beer? Oh never mind).

Since I started homebrewing my understanding of beer has improved considerably. Which has come in handy because I also write a weekly beer column for my local newspaper, so being aware of the steps in the brewing process has aided my ability to review beers. For instance, it wasn’t until I started brewing that I knew that hops could provide bitterness, flavour or aroma depending on where in the process they’re chucked in. I also learned what dry-hopping was – a phrase I’d read about on a few beer labels but previously had no idea what it meant. 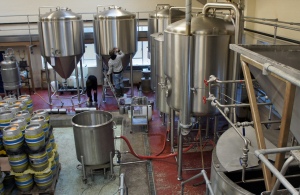 In my head, this is what my home brewery looks like. In reality, it’s a plastic fermenter under my stairs. I like my fantasy brewery better.

You could even say that, BH (Before Homebrewing) I didn’t really understand what went into beer. Oh, I knew it was made up of ‘‘water, hops, malt and yeast’’ because I’d seen a few brewers wearing shirts with that emblazoned on them. But, aside from water, I didn’t really have much of a concept of the other three. Now, I at least know how a beer is put together.

It’s also helped me while visiting breweries. Previously, I’d visit a brewery and the brewer would be explaining how everything worked. I’d just nod and pretend I knew what they was talking about, lest they think me some sort of beer charlatan. Now, because I brew at home, I’ve got an understanding of the process – I know which order each ingredients are added and where it all ends up.

Homebrewing has also led to me becoming, shall we say, obsessed by beer. Before I was certainly interested in beer but, now I’m making my own I’m fascinated by the process. I read books and magazines about beer and brewing to see if I can glean any new information. I devote a shocking amount of my thinking to what beer I might brew next. I obsess about how to make it, asking for help via Twitter and this blog (and also pestering a few professional brewers I know for guidance). I also have to watch myself when someone asks me about homebrew in a social situation because it’s all too easy for me to crap on about it for an eternity. And yes, the fact that I write a blog about beer is obviously another sign of that obsession.

Has it changed the way I approach beer in general? Not really. I can still appreciate a tasty beer without spending ages trying to work out exactly what the brewer did to it (unless, of course, I want to copy it, then I just google recipes for it because I’m too dumb to work out ingredients just from tasting a beer). Nor has it made me hypercritical of beers either – I don’t get all bent out of shape if the malt overbalances the hops, or if they’ve gone stupid with the dry-hopping. I think that’s because I don’t see myself as any sort of expert on beer or brewing – I still describe myself as an enthusiastic amateur. And, if I don’t like a particular beer, I don’t think that means it’s a bad beer per se, it just means I don’t like it.

In closing, I can honestly say that homebrew kit was the best birthday present I’ve ever gotten. And it’s worked out okay for my wife too – every now and then I’ll brew a beer she likes. So everyone wins.