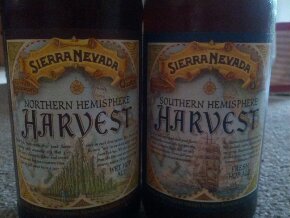 I know Michael Jackson (insert overused “not that Michael Jackson, the other one” here) was famous for saying that the United States was the world leader when it came to beer.
And he was right in a lot of ways. I’m sure that, if I went on a trip to the US, I’d be drunk most of the time. And would no doubt have carry-on luggage that clinked on the return flight.
But if there’s one thing I don’t like about the US scene is its apparent obsession with overly-hopped IPAs. See, in Australia, we have brewers that will make an American IPA but will ensure that it’s also balanced. It’ll definitely have a kick, but it doesn’t cause you to pucker your lips, squint your eyes and wonder if you’re going to be able to finish the bottle.
The Sierra Nevada hemisphere hop ales offer a neat example of this. The Southern Hemisphere, made with dried, fresh hops from New Zealand is a nice piece of work. It makes use of the NZ hops but doesn’t go overboard, resulting in a beer that’s over 7% but doesn’t seem like it.
But then we have the Northern Hemisphere wet hop ale and, guess what, it’s exactly what I expected from a US IPA. I don’t exactly mean that in a good way either. The dominant characteristic is bitterness. A bitterness that I didn’t acclimatise to by the halfway point in the glass. A bitterness that was always front and centre regardless of the fact that my palate was somewhat deadened by the few beers I’d already had.
Some of the US IPAs I don’t mind, but as an occasional thing. There is simply no way that I could drink it regularly but they’re an enjoyable novelty. But some others, not so much. Like the Northern Hemisphere – the bitterness was so overwhelming that is made it impossible to enjoy the beer.
Seems the approach some US brewers take with hops is like a restaurant that cooks a meal so laden with a certain spice that it’s all you can taste. You know there were a number of other ingredients that went into the dish, but it’s that spice which is all you can taste.
And surely it’s easier to crank up one ingredient to overwhelming levels than to feature it while also ensuring it’s in balance with everything else.
Would I drink them again?: The Southern Hemisphere, yep. The Northern Hemisphere, no. In fact I didn’t even finish my glass.