As of Monday I’ve been making an attempt to get back on the Weekday Wagon.
It’s a concept that was borne from drinking too much of the wine from the family winery (which no longer exists – and not because I drank it all). See, with that much red wine on tap, it was very easy to have one glass a day. Then two and then maybe three. 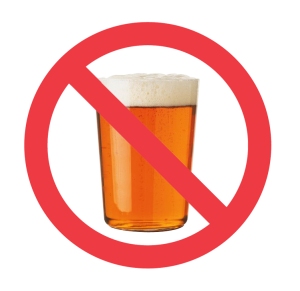 After a few weeks I thought, ‘‘this is probably not the greatest thing I could be doing for myself.’’ and so I built myself the Weekday Wagon and climbed on board. What that means is that I aim to only drink from when I finished work on Friday night until bedtime on Sunday. Mondays through to Thursdays were all alcohol-free.
And I did feel better pretty quickly. Some of it was surely psychological – I thought I was doing something good for myself so I felt good – but I’m sure some of it was physical.
That Wagon is not always hard to stay on – a hard day at work might have me reaching for a drink, or a weekday work function – but I pretty much held on.
That was until the Olympics. Because I thought it would be good for a laugh, I created the Beer Olympics for this blog. That saw me drinking a beer from a different country for every day of the Olympics.
And since then I reckon I’ve had at least one beer every day – with perhaps one or two exceptions.
While drinking beer is undeniably fun, I’m certain it’s not doing stunningly good things to my waistline. And on those days when I had a few beers, it doesn’t do good things for my sleep either – because I have to get up to go to the bathroom at least once a night (the joys of getting old).
It’s not going to be a hard and fast rule – as a beer writer for a newspaper, that wouldn’t be practical. For instance, I’ve got to try HopDog’s new pumpkin beer tomorrow for a review, and I have a bit of a backlog of beers from Riverside and Bright Brewery to sample my way through.
But I am going to make an effort to stick to it as much as reasonably possible. Simply because I’m already feeling better after one beer-free night – both in terms of health and in terms of not feeling guilty about my health. And it doesn’t hurt that’s it’s being done in tandem with a return to semi-regular jogging.
I guess it’s the part about craft beer you never seem to read about – worrying about the health implications of a few pints. Perhaps it’s something we all think about but try not to, lest it diminish our enjoyment of those few aforementioned pints.
I can honestly say I’ve read quite a bit of beer-related commentary and the idea that too much mightn’t be good for you doesn’t seem to get much play (except for some of Beer Bar Band’s stuff).
I guess this means I’ve just written a beer blog entry that is about not drinking beer. And I’m okay with that.