Uncool and proud of it

Ages and ages ago I can remember going into a record store and buying Nirvana’s Nevermind album. 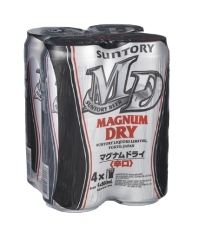 Suntory Magnum Dry. Actually not as awful as you may have been led to believe.

Yes, it was back when they had things called record stores. And, in another instance of showing my age, I was buying Nevermind on cassette.
Now, before I lose any readers under the age of 25, (‘‘Record store? You mean you used to go into a shop to buy music?!?!) let me move on.
When I was in the shop, some super alternative dude with tattoos and piercings – before either were cool – derided my choice. Instead he told me I should be buying Bleach (which was Nirvana’s first album but I – a nerd with no tatts or piercings – didn’t know that at the time).
Music is renowned for that type of person. The type who think their choice in bands or albums is better, because they’re so knowledgeable and on the cutting edge. And they use that knowledge to look down upon others who aren’t as smart as they.
I think something similar exists in the world of beer too. In fact I know they do because I’ve met them in person or read their blog postings. They’re the beer snob. The kind who is on a quest to find the latest, the newest, the weirdness beer they can find. Not for the simple purpose of enjoying it but rather so that they can brag about it and point out how you haven’t.
They’re the kind who might have liked a brewery’s output at one stage but then went off them when everyone else started drinking it too.
They’re the kind who is likely to mock or ridicule a beer based, not so much on what it actually tastes like, but the image – or the feeling that they’ll somehow be less cool if they admit to liking something simple.
Which – in a very, very roundabout way – brings me to Suntory Magnum Dry.
Recently imported into Australia from Japan, but brewed in China, it’s a beer that has taught a lot of us about a new style of Japanese alcohol called happoshu.
As I understand it, in Japan alcohol is taxed on the basis of how much malt a beverage contains – the higher the amount, the more tax. Inevitably, this has created a range of quasi-beers called happoshu, which are so absurdly low in malt that they’re almost a soft drink. Least that’s what I hear.
Now the beer snob has heard this and instantly lambasted Magnum Dry for not being beer at all. But according to this article, the Magnum Dry we’re getting is not the same version sold in Japan. Point that out and it wouldn’t matter because they’d likely then say, well it’s still a mass market lager and lagers are all crap.
I’d beg to differ with that. I don’t see myself as any sort of beer expert and I’m far, far too old (I bought Nevermind on cassette, remember?) to worry about trying to seem cool. Because I’m not – and I never was.
So I can freely say this – I actually don’t mind Magnum Dry. Sure I’m not going to bypass the craft beers at the bottle shop in favour of picking up a four-pack of this ‘‘if you squint the can sort of looks like Sapporo’’ beer.
But, if I was going to a barbecue of someone who only ever bought mainstream lagers, I’d be happy to find this in the esky (yes, it’s true I’d have most likely brought my own beer along, but you get the point). I’d certainly opt for a can of Magnum Dry over any mainstream Australian lager I could think of.
Sure, it’s inoffensive – but what I like is that slightly sweet maltiness at the back end. I got a four-pack to sample and I may well even drink all of them rather than leave them until a house guest with no idea about good beer comes for a visit (that’s who the spare bottles of Arvo lager are waiting for).
So the morale to this Saturday afternoon rabble? Simple, just judge a beer on what it is – not on what it says about you.
Would I drink it again?: Yep. It would be far from my first choice but, if someone put one in my hands I wouldn’t be thinking ‘‘oh God, not this crap!’’.