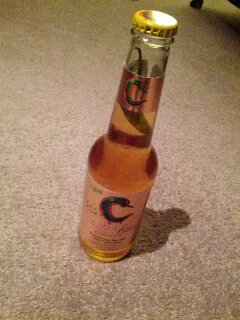 Permit me a bit of a rant about language.

These days people seem far more prone to exaggeration, making out some trifling incident was a nightmare or the “worst thing ever”.  Really, the worst thing ever? Worse than, say, losing a limb? Worse than, perhaps, finding out you no longer have a job, the bank is taking your home and your wife is sleeping with you neighbour?

Without a word of a lie, I would prefer to drink any mainstream Australian beer – even Crown (a beer I have a serious, serious, ethical and moral problem with) – rather than this stupid chili beer.

What sort of person creates a beer with a chili? Who do they think will drink it? Is there really someone who thinks, “you know, I don’t want a beer that’s refreshing and relaxing. I want one that smells like taco sauce and burns my mouth”?

I seriously had one sip of this beer and then simply could not bring myself to drink any more of it. So I tipped it down the sing, flung the chili in the bin and then rinsed out my beer glass with hot water to remove any vestiges of this disgusting beer.