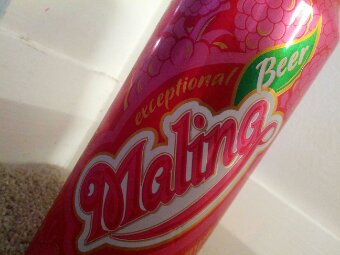 Every now and then in beer fridges around the place you’ll stumble across oddities.
One if the oddest beers I’ve found was one from somewhere in Europe that had a woman on the label clothed in that grey stuff on instant lottery scratchies. The idea was that you scratched off the woman’s clothes and, lo and behold, she was naked underneath.
It was an important selling point because I recall the beer itself as being terrible.
While it has no nudie pics on the can, Malina is an odd beer. As you could perhaps guess by the garish colour of the can, this is as much a soft drink as it is a beer. It claims an “exceptional raspberry taste”. Raspberry taste yes, exceptional no.
Pouring this “beer” I was quite surprised because I was expecting to see a real reddish tinge, but it just looks like a beer. Which leads me to presume it must be flavoured with some sort of raspberry extract thingo rather than actual raspberries.
The raspberry ain’t there in the colour, but it’s definitely there in the smell – it’s big on raspberry. Very big. Drinking it is less than pleasant; it’s really sweet, sweeter even than those pseudo alcopop ciders that are popular these days. There is a beer base to it, which pops up at the back and creates a really strange beer-fruit syrup flavour.
Would I drink it again?: Well, I didn’t even finish the 500ml can, so what does that tell you?