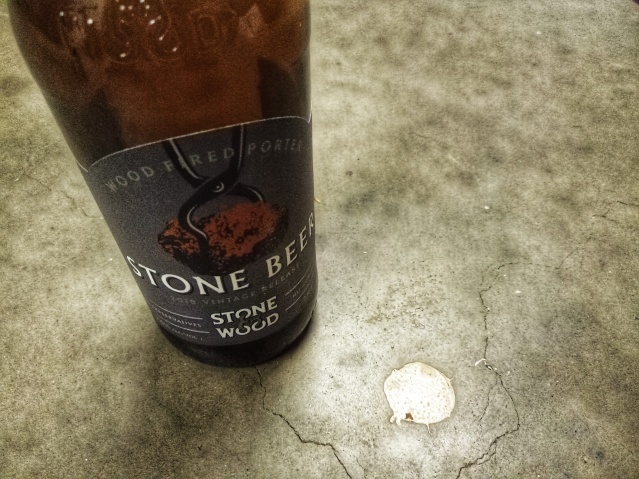 1) I like this time of year. I like rugging up against the cold weather. I like sitting inside listening to the rain. Winter is the footy season. Summer – bah – summer’s all heat and sweat and cricket and sunburn and complaining that the airconditioner control doesn’t go low enough.

2) Another thing I like about this time of year is the annual release of Stone & Wood’s Stone Beer. It’s been a thing in the Australian beer geek scene since 2011 – or possibly older, though I couldn’t find any earlier mention of it (BTW that year it was a 5.3 per cent beer, which is the lowest alcohol count the beer’s ever had). It’s a story geeks know well; around this time the brewers at Stone and Wood drag out a million sacks of grain – this one’s got six different malts. One of the bosses, a guy named Brad, brings out his volcanic rock collection from Fiji and chucks them in a fire somewhere at the brewery.

3) When they get nice and hot, the rocks go into a basket and then into the tank for a while. When I was younger and a whole lot stupider, I thought the hot rocks replaced electricity for the boil. But I now know the rocks are more about the showbiz – it marks the beer out as something different. Though there have been some years where the caramelisation that coats the rocks as they cool in the wort comes across in the finished beer.

4) The ingredient list includes the Stone & Wood go-to hop Galaxy. While I can’t taste that Galaxy fruitiness, I’m not really supposed to. With Stone Beer, it’s the malt bill that’s the star of the show. The aromas here are largely of coffee with that also turning up at the front of the palate, followed by some dark chocolate at the back end. It does finish of with some bitterness, courtesy of those hops, which round things off quite nicely.

5) One big change for this vintage is the 500ml bottles have been dumped in favour of 300ml . I’m not sure how I feel about that. One the one hand, it does mean I can buy a four-pack of Stone Beer. On the other, something in me feels a special once-a-year beer needs to be in a bigger bottle.

Free or paid for?: The Stone & Wood people sent me two 300ml bottles of Stone Beer.