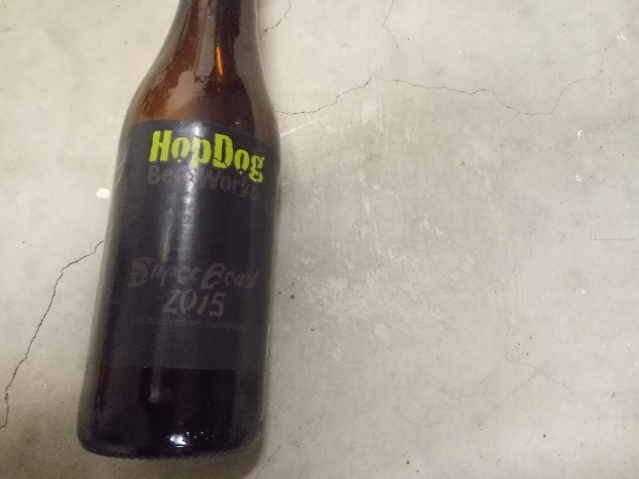 1) The end is very much in sight for HopDog. Tomorrow in fact. Yep, after trying to sell the place for 12 months Tim and Tess Thomas have gotten tired of waiting for a buyer to materialise. Instead they’ve decided to close. Tomorrow. Seriously, tomorrow (Saturday, July 7) is the last day you can fill a growler or pick up some beers or bend Tim’s ears at the cellar door.

2) This is a little bit sad – Tim was one of the characters of the Australian craft beer scene. He’d make weird stuff, not because it was cool and would attract the geeks, but because it was what he wanted to brew. There was no way he was ever going to make a lager and, as for your other mainstream styles, I’d always figured they bored Tim. Which was why he always looked to take a few left turns when creating a recipe.

3) The closure comes about a month before he would have been due to make the 2018 version of SuperBeast, the HopDog birthday beer. He wasn’t interested in hanging around til August to brew that and then spend months trying to sell it. So no SuperBeast this year.

4) So it’s fortuitous for me that I recently found some old SuperBeasts in a box under the stairs. While the SuperBeast starting point was always a barleywine Tim couldn’t help but tinker with it, turning it into something a little bit different.

5) The 2015 version was a barleywine/black IPA/imperial stout hybrid that weighed in at 10.6 per cent. I’ll be honest, there was a bit of trepidation when I cracked open thisbeer. Would it be a gusher? Will it have fallen apart in terms of balance? Will it be a disappointment? The answer is a loud “No” on all counts. This is a staggeringly good beer. The balance was so outstanding, it tasted like it had been bottled three weeks ago, not three years ago. Nothing’s missing, nothing’s out of place, and there are still plenty of coffee and chocolate flavours, with a smooth mouthfeel. And there’s still no sign of that high ABV. Guess it gives me a taste of what we’ll be missing after Saturday when there’s no more HopDog.

Free or paid for?: I’m pretty sure I bought this beer but it’s hard to say for sure – it’s been three years.