What sort of beer are you making for GABS?
We’re making a Japanese-inspired black rice lager. It’s got buckwheat and red sorghum adding some interesting “culinary” mouthfeel to that lovely black rice (as well as some actual barley!), our favourite underappreciated hop, the ever diverse Loral, and a tideload of organic Tasmanian seaweed. The seaweed is what really GABSify’s this beer. The semi salty umami character really takes this beer somewhere else. Many punters will be thankful for the small pours, but I reckon a few will be pining for some pints. 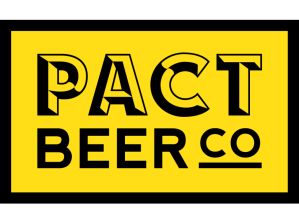 Nomihodai – the Japanese word for “all you can drink”. It’s a fantastic hospitality tradition that couldn’t exist in Australia’s prevailing drinking culture, but this is our respectful ode to it.

Where did the inspiration come from?
In terms of ingredients and general approach, Tim (the other half of Pact) was off to Japan for a ski trip and I asked him to find a unique ingredient to stem my GABS writers’ block. He failed miserably, but the trip got my mind working in the direction of the rising sun.
A further, and more specific inspiration was the enjoyment I get out of cross pollinating with non beer brands for these special beers. Last year we collaborated with Butterbing Cookie Sandwiches and it was such an enjoyable and valuable experience for both brands, so I wanted to pursue that sort of relationship again this year. In devising the recipe, I reached out to a number of potential partners whose products could help complement the beer. In the end, we’ve got this fantastic array of sponsors, with black rice from Forbidden Foods, specialty malts from Voyager Craft Malt, and Tasmanian hand harvested seaweed from Tasmanian Sea Vegetables. Quite the hotpot!

Would you still drink craft beer if it was all alcohol-free?
I suspect my whisky intake would increase exponentially, but I’m going to say yes – occasionally. Back when I first really got the brewing bug, I was ramping up for the AABCs (Australian Amateur Brewing Championships) and planned to enter something like 25 beers for the year, which necessitated some jam packed, long weekends. Back then, I was even less professional than I am now, so it always felt natural to have a beer while brewing … less so at 6am, though, so I developed quite an appreciation for the de-alcolised beers. I am morbidly curious to see what a heavily dry-hopped zero percenter would taste like!

What’s the dumbest thing you’ve had someone say to you about beer?
It’s often me saying dumb things after beer, but I had an experience just today that has really stuck in my head as perhaps one of the dumbest things I’ve heard since I started brewing. So pardon me if I can rant a moment…
It all came out of a fella asking a question on a online brewing forum, opening his question with “hello brewers and brewettes”. The guy was not trying to be offensive, and was possibly trying to recognise, but was rightfully called out for an unnecessary genderfication. The guy quickly apologised, but then it rapidly descended, as things on the internet are wont to do. Before long we’ve got fellas questioning why it’s such a big deal, “anyone who has a problem with this has major issues”, etc.
Major issues such as “respect”, I imagine?
This experience became a crescendo of a general dismay I’ve felt for some time in regards to attitudes towards women coming out of some parts of the beer scene. Certainly, we’ve got an array of fantastic women working in and around beer – people like Kirrily Waldhorn the Beer Diva, Emily from Froth, and Jayne and Danni from Two Birds (just to name a few). These are people who are heroes to many for what they achieve for the beer scene generally, long before one considers the fact that they are up against a cemented demographic and an unfortunate undercurrent of at best ambivalent and at worst sexist attitudes from some.  What really concerns me is that these attitudes are working against the next great woman becoming inspired to be a homebrewer, a brewer, a journalist, a beer judge, or anything in between.

The Great Australian Beer Spectapular is on in Melbourne on May 18-20 at the Royal Exhibition Building, Sydney on June 2 at the Sydney Showground and ASB Showgrounds in Auckland on June 30.