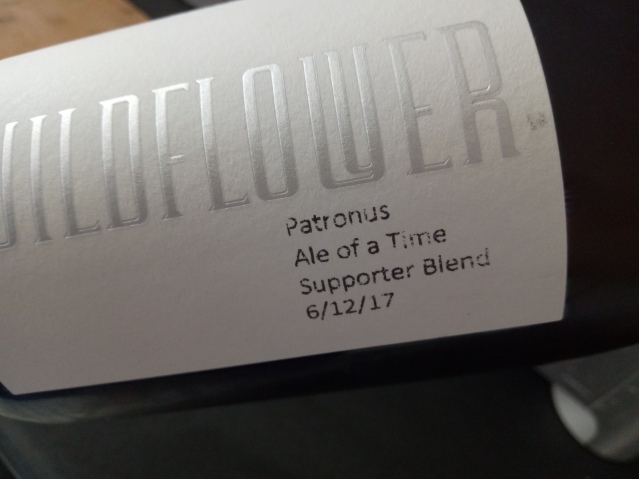 1) Beer is funny sometimes. With pretty much anything else you could eat or drink, describing it as tasting a bit like a horse-blanket – or even a leather saddle after a horse has been sweating on it would be a real turn-off. If I saw an item on a menu described that way, I’m steering well clear of it. And yet, when it comes to beer, that’s a desirable flavour.

2) If you’re going to drink a beer that’s got some Brett funkiness going on, you’ll be disappointed not to get some flavours reminiscent of horse accessories. Well, as long as the beer is supposed to have those flavours. I’ve always said the difference between a sour beer and a mistake is intent. If you meant for it to turn out that way, it’s a good thing. If you didn’t want it to taste all horsey, then you screwed it up.

3) When it comes to Wildflower’s Patronus it’s definitely a case of the former. It’s a super-limited release beer (less than 50 bottles released, I understand) made as a perk for those who pay a bit of money each week to keep Luke Robertson’s Ale of a Time afloat. I’m not going to link to his page because he has way more followers than me (oh, alright then, here is it). I flung him some dosh because I got some use out of the site and have a little bit of an idea how much work goes into keeping a blog trundling along.

4) Wildflower is a place that has been the subject of much hype in the last 6-12 months. Which always makes me a bit suss. So I ordered one of their beers (the golden ale) and expected to be underwhelmed. Well, I wasn’t – it blew my head off. There was a staggering level of complexity. For some reason it reminded me of a page in a Where’s Wally book, where you can look at the picture for ages and then suddenly see something new. Drinking the beer, it seemed there was always something new happening on my tongue. It just kept giving and giving.

5) From what I understand Wildflower doesn’t brew beer.; it gets someone else to do that. What they do it whack it in barrels, add some wild yeast captured in various places in NSW and then blend this barrel with that barrel. For Patronus, it’s a blend of a beer that had been placed in chardonnay barrels but without any yeast pitched and another beer they’d had sitting around the place since the early days (it was used to top up some of those early beers). The result is more subtle than that golden ale I had. I can definitely taste the characters of both beers – the oaky chardonnay is there up the front before all that horse sweat comes in just after the mid-palate (there’s a note of vinegar in the middle, which almost serves as a border between the two). I just wish I knew how much alcohol was in it as I felt a bit squiffy after finishing the 750ml bottle.

Free or paid for?: I forked over my own cash money to get a bottle of this. I wish someone would make a beer like this for my blog. Hell, I’m not fussy, I’d accept just about any beer.

Hooray! After a long wait, Chimers album is here.