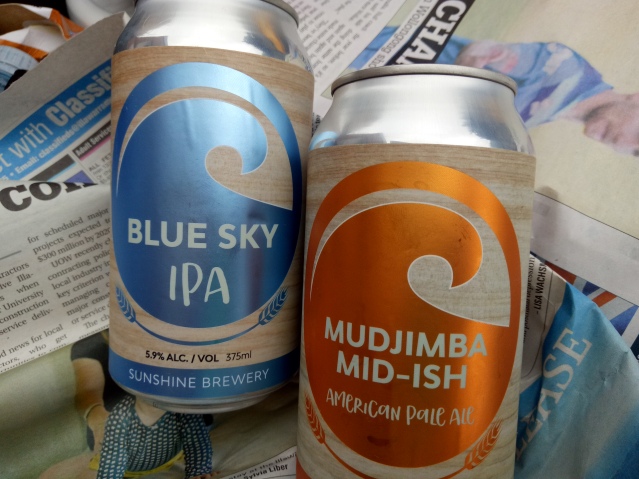 1) Being a parent means that when you’re on holidays and want to stop in at a brewery, the kid has to come along. Which, I have to say, is pretty boring for the kid. If she’s got access to an iPhone she can amuse herself for a while. But if there are no screens to distract her, she can quickly enter “what time are we going?” territory.

2) There weren’t any screens to distract her when, on a holiday in Queensland last month, we stopped in at Sunshine Brewery (which is not to be confused with the Sunshine Coast Brewery – that’s a separate entity). That turned out to be not a problem at all as they’ve got a big indoor play area for kids with toys and a bunch of other stuff. She enjoyed herself so much, it was the first time she was disappointed to leave a brewery.

3) I’d slotted in the brewery visit while my wife was planning our itinerary and so was very much looking forward to stopping in. As you do, I bought a tasting paddle which comes with five glasses that hold at least a middy’s worth of beer each. You ask me, that’s far too big for a tasting paddle – from both the brewer’s and the customer’s perspective. From memory, the paddle cost around $16 – you try and buy five middies of beer for that price anywhere. The brewery’s profit on those paddles must be so small. As a customer, I found the last three beers in the paddle had warmed up by the time I got to them – which made for a less-than-pleasant tasting experience. In a warm climate like the Sunshine Coast serving small glasses would ensure the beer in all five glasses remains at its best.

4) Still, I thought I’d give the beers another shot and so picked up two four-packs on the way out. They didn’t exactly help their cause. The first one I tried back at the hotel – the Mudjimba Mid-Ish – was overcarbonated (others have made similar complaints on social media). An American pale ale, I didn’t get any of the expected fruit or pine notes on the nose. On the tongue I got quite unpleasant, almost chemical, bitterness, which suggested there had been some issue with the mashing in.

5) The other four-pack I picked up was the Blue Sky IPA. Worryingly, it had exactly the same fault in exactly the same place. An overwhelming and out-of-place bitterness right in the middle of the palate. To have the same fault in two different batches of two different beers is a bit of a concern. It caused me to remember the long list of different beers the brewery had made in the short time it had been open. That led me to think they might be better served by keeping the range simple and focusing on getting those right before spreading out.

Free or paid for?: I paid for the crazily huge tasting paddle and for two four-packs of cans.