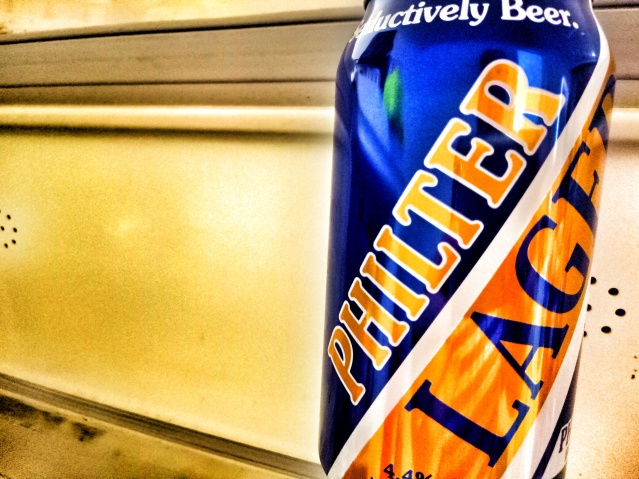 2) And lagers just don’t do that. So screw lagers, right? Well …. No. Because for those who know anything about brewing, a lager is a bloody hard thing to brew. Those loud beers offer a brewer a lot of things to hide a fault behind. Hell, I’m willing to bet some of the sour beers I’ve had weren’t meant to come out like that; something went wrong in the process, so the brewer rebranded. The difference between a sour beer and a mistake is in the intent.

3) But a lager, well, it doesn’t have a whole lot of bells and whistles. Which means there’s nowhere for a brewer to hide; if they screw up it’s there for everyone to taste. Which is why I’d be skeptical if someone came out with a sour lager. Nah, you just screwed up, didn’t you?

4) Philter, the brewery with the lovely retro ’80s cans, has just released a lager. Which makes sense – if you’re going to have ’80s livery then you have to have a lager. And it’s a good’un too. I’d say it’s perhaps not totally “to style”, in case you’re one of those stick-in-the-butt types who think that crap’s important. That not to style bit comes at the end, where there’s more bitterness that I’d expected, but I found I liked that. The aroma is clean with some bready notes, while there are some honey characters on the tongue and quite a good mouthfeel given it’s 4.4 per cent. It’s a flavour profile that doesn’t scream “HERE I AM AND I’M GREAT!”, but it’s a lager, so it’s not supposed to.

5) If you want something like that check out Philter’s Red Session Ale. It has more alcohol than the lager and a whole lot more hops. All-up, it’s big and thick and tasty.

Free or paid for: The Philter people sent me a mixed six-pack of the three beers in their range. The other one is the XPA, which I’ve already written about here.