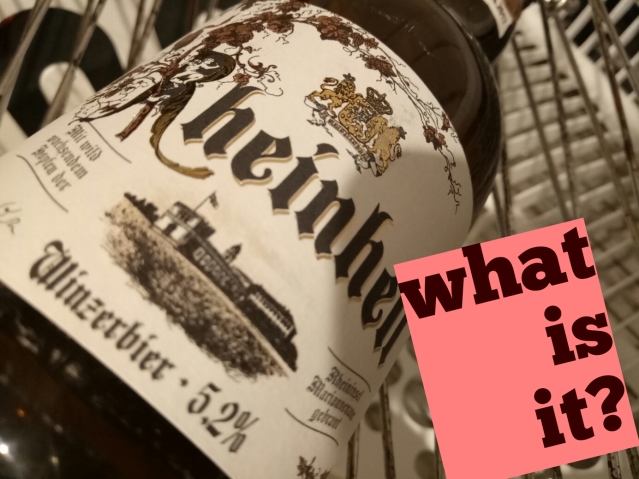 1) Sometimes it’s a good to be a little clueless. Sometimes knowing too much can strip you of the joy of discovery. And sometimes you just want to drink a beer without having to Google the crap out of it first.

2) And so it was with this beer – the 5.2 per cent Rhienhell. With the exception of the phrase “beer – product of Germany”, the entire label is written in German. So when I picked it up off the shelf at Figtree Cellars, I had no idea what it was. Well, the front label seems to say it’s a “winzerbier” but i truly had never heard of that before.

3) Which made me buy the bottle. Because this was a great chance to try a beer with an open mind. That’s really hard to do – if you pick up an IPA then you’ve already got some idea of what the beer is going to taste like. You close your mind off from the idea it could be a stout, a lager, a Belgian or whatever else and open your mental file that contains all your thoughts and expectations about IPA.

4) Then, should the beer not reach those expectations, you end up disappointed. But that can’t really happen with a “winzerbier”, because I’m coming at it with no preconceived notions. What I got when I popped the ceramic swing-top lid was a cloudy apricot-coloured beer that tasted a bit like a hefeweisen and a bit like a witbier – and then came some sultana characters, which confused me a bit.

5) Having drunk the beer, if you’ll excuse me for a moment, I’m going to Google “winzerbier”. Which wasn’t that helpful as the sites were in German. Then I went to an online translator, which told me it meant “tiny beer”. But “winzer” means “winegrower”, so maybe there’s some wine connection to the beer. All of which means, in this instance, I could have Googled the crap out of this and still been a little clueless.

Free or paid for?: I bought a single bottle from Figtree Cellars.