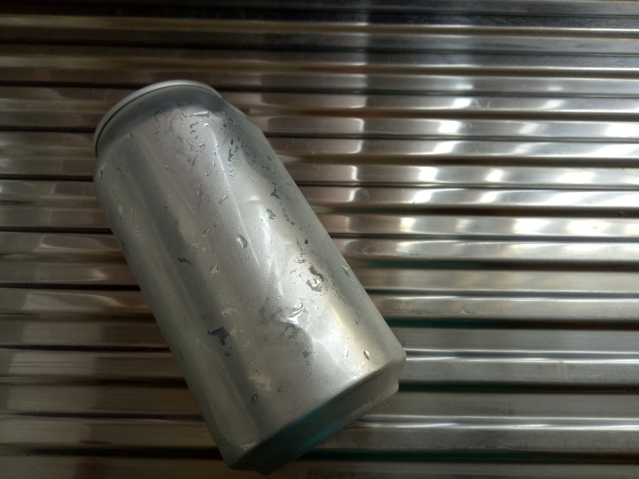 1) The can in this photo is really nothing special to look. It’s a label-less silver can, with a few dings anf dents at the top. There is seemingly no reason to get excited about anything here at all.

2) Until you realise what’s inside the can, that is. For this is a canned version of the Illawarra Brewing Company’s Chuck Norris – their much-loved red ale chock full of hops. In fact, I’d go so far as to say The Chuck is the IBC’s most popular beer. Any time they mention on social media that they’re brewing a batch, the geeks get very excited and the bars start hitting up the brewhouse for some kegs.

3) It’s the same story ever since they put out some Facebook and Instagram posts on the weekend showing they were canning Chuck Norris. Things went crazy. And I have to put my hand up as being one of those crazy people. I ducked into the brewery on Monday to see if I could buy a six-pack of Canned Chuck. Of course I was too bloody early – there was no canned beer ready to go.

4) No labelled canned beer, that is. When canning a beer, it seems to be a given that there will be some cans that either aren’t filled to the right level or have some other fault that makes them not perfect for sale. I was able to get my hands on a few of those, through the good grace of Dave at the Illawarra Brewing Company.

5) It doesn’t taste like there’s anything wrong with those cans to me. I cracked one open on Monday night and it was great – a snootful of fruit salad-like hops kick things off, followed by a thick malt notes of ginger biscuits (those thick Ginger Nut biscuits, not the thin, sweet Ginger Snap sort. Biscuit geeks will get the difference), which seamlessly morphs into some strong bitterness from those hops (Mosaic, if I remember correctly). I had the other can on Tuesday, in an air-conditioned house with the sun sending down a deathly hot 38 degrees and it was even better. The guys at the brewhouse reckon they’ve got stock to last a while. I reckon they’re kidding themselves – these cans are going to fly out the door. By the time you read this, they may even be labelled and ready for sale.

Free or paid for: These two unmarked cans were free but once the labelled cans are ready to go I’m buying some. Hopefully before everyone else gets in and buys them all first.