Not waiting til December

On the way home from work yesterday, I stopped into Uncle Dan’s to buy one of those Craft Beer Countdown Christmas advent cases. I think the guys at Bridge Road Brewers organise it all.

Here’s a photo of the case as soon as I got it home.

And here’s another photo of it all of three minutes’ later. 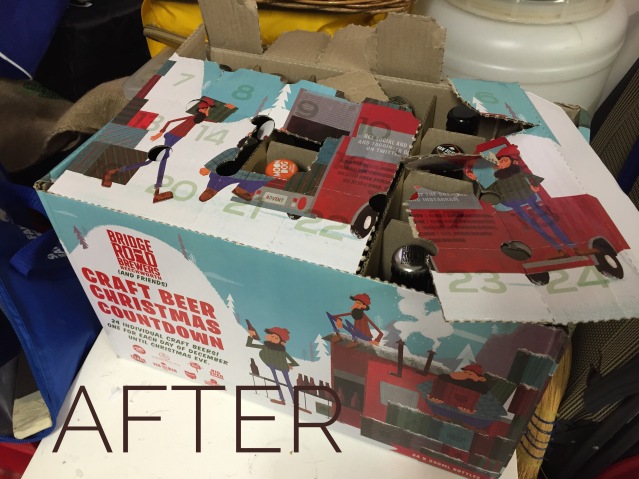 Yep, I couldn’t be bothered waiting until December 1 to see what was in there. The idea of having a case of mystery beers sitting at home for a month was too unpalatable. Besides, I look at these advent cases as more of a beer lucky dip than any Christmas thing.

In the pic I made sure not to give away any of the beers in the case. Sure, you can see the bottle caps, but the participating breweries are written on the box anyway. I will say there are a few beers (around five) that I’d never had before. Which is always a win when these packs are concerned.

Even better is that there are one or two beers whose inclusion surprised me. In a good way – I was very, very happy to see them there.

PS Another reason I opened this early is because I’ve ordered two other advent packs. Leaving them til December and then drinking three beers a day for most of December doesn’t seem a great idea.

PSS Will I open those two early as well? Goddamn right I will.