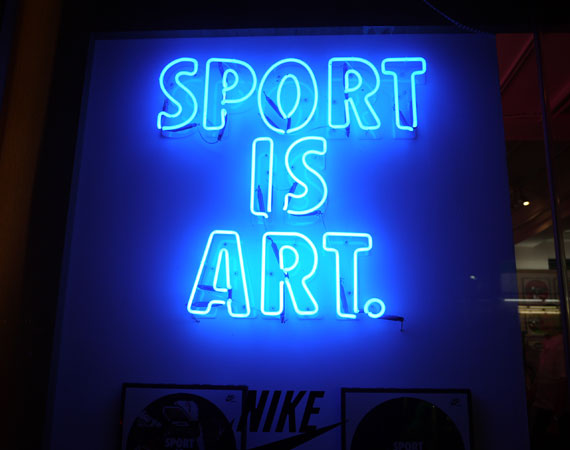 “I thought you guys were into art and stuff.”

That’s what a former sports reporter where I work once said to a group of my friends. They were in a band together and came across them having an in-depth conversation about footy. He was gobsmacked because it would seem, to him, that the worlds of art and sport were totally separate. There could be utterly no overlap.

Actually, that sports reporter was a bit unusual, because that sort of thinking usually goes the other way. You don’t get too many sport lovers expressing surprise at someone also professing a liking for a little bit of culture. But there is an awful lot of art mavens who think you’re only allowed to like one or the other.

You know who I’m talking about. They’re the ones who post smug tweets during sporting events where they deliberately show how uninterested they are in the game, or maybe even suggest those who are getting some enjoyment out of said sporting event are little more than subliterate morons.

But here’s the thing. People can and do like both sport and art. It’s so totally allowed, you know. There are people will go to the cinema to watch a subtitled movie on a Friday night and then head to a stadium to watch the footy. Hell, there have been times when I’ve gone to a film festival the night before PLAYING footy the next day.

Sport and art are far from mutually exclusive. Famous Australian author Tom Keneally is a mad Manly Sea Eagles fans and there are loads of musicians who love their footy too. Both sport and art inspires emotion in people, they bypass the rational parts of us and make us react from the heart.

People can – and do – love both art and sport.

Even if a sports fan doesn’t like art, guess what arty people – that’s okay too. People are allowed to like different things. Just because you don’t like sport doesn’t mean sport is stupid. It just means you don’t like it. Really, how high an opinion must you have of yourself to think your taste is totally beyond reproach, that something is unarguably good just because you like it?

So remember this next time you’re considering mocking someone for daring to like sport. It says more about you than it does about them.

And what it says about you is that you’re an insufferable dick who can’t get through life unless they feel superior to someone else.