So I found this new beer at my local First Choice Liquor. 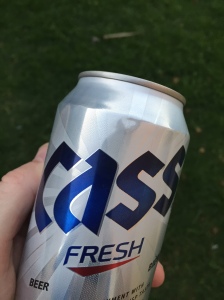 You ask me, Cass is a poor choice for a beer name. And here’s why.

“Fizzy”? Yes, one of the words most often used to deride bland mainstream lager. Eg “fizzy yellow water”. And these guys decided it was a great adjective to use on their can.

So where it is from? It’s from South Korea. Which means you could call it imported lager.

And there’s another smartarse blogger joke right there Note the ingredient list includes “hop” – as in one solitary hop. After having tasted it, that – and the adjective of fizzy – seem about right. There’s not much of anything going on in this beer. And where’s the yeast?

So that ordinary taste is why it ended up here.

Free or paid for: Used my own money for this one. Unfortunately.

I need to get up. But don't want to wake her. Damn.