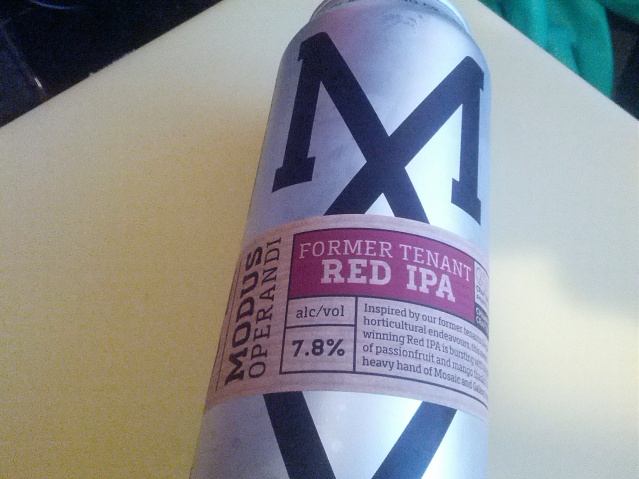 1) There I was sitting at home in front of the computer working on my book (which book? This book). As is the nature of writers, procrastination is ever-present. So I was toodling through my Instagram feed on my phone because it’s way easier than that doing actual work like writing. Then I saw it, a photo that stopped me in my tracks.

2) It was a photo from Thirroul Cellars, a place up the road that stocks some good beer. It was a photo of some silver 500ml cans from Modus Operandi – Former Tenant red IPA and the Modus pale. I got very excited. And I kid you not, I put my phone down, shut down my laptop, grabbed my car keys and drove straight to the bottle shop.

3) If I’ve heard a bottle shop has a beer I want, I have been known to call them and ask to put one or two aside. Or I calmly wait til the end of the work day and then drive over on my way home, because there just aren’t enough beer geeks in Wollongong to cause some mad rush and empty the shelves of some new beer. Hell, I’ve seen hot new beers still sitting on the shelf a week after it arrived. So there’s never a need to drop everything and rush to the bottle shop.

4) And yet I did exactly. Why? Because Modus Operandi is all the way up in the Northern Beaches. As far as I’m concerned, they may as well be on the moon – there’s no way I’m getting from Wollongong all the way up there. So I’ll likely never get there (well, get there again, I did pay a visit while on a Dave’s Brewery Tour bus). Another reason is that their kegs almost never come down Wollongong way; I reckon I’ve seen precisely two Modus beers on tap in the Illawarra. A third is, before last weekend, their cans had shown up in no bottle shops down here. And, to be honest, I never thought they would. So yeah, I herbed it over to that bottle shop.
5) I bought cans of both beers but it was the Former Tenant I was really after. Sticky and resinous, with bites of tropical fruit like mango and pineapple, it’s delicious. I seriously had to restrain myself from buying all the cans of this they had. Who knows, maybe Thirroul Cellars will still have a few cans left this weekend.

Hooray! After a long wait, Chimers album is here.