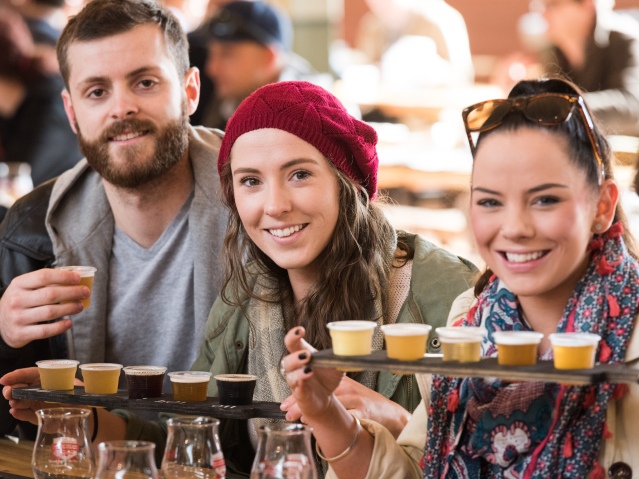 Chances are very high that at least one of these GABS goers voted for a sweet beer in the People’s Choice award.

There’s no doubt about it – the punters at GABS love their dessert beers.

After last year’s festival I published this breakdown of the previous People’s Choice winners – with top 10s for 2014 and 2015 and a top five for 2013.

If you can’t be buggered clicking on that link, what it says is that the number of People’s Choice finalists that could be classed as “sweet” or “dessert beers” increases every year.

This year, the People’s Choice bucked that trend. Actually, I’m totally kidding, it didn’t do that at all. Instead, the 2016 top 10 featured more sweet tooth beers than any other year.

4 Tiramibru – Wolf of the Willows Brewing

The beers I’d consider at the sweeter end of the spectrum have been put into bold. As you’ll notice there are seven beers there – so 70 per cent of the top 10 is sweet beers. Not even the juggernaut that has been Pirate Life could muster up enough momentum to push a sweeter beer off the top spot (yeah, I know it’s a gose but it’s also got peanut brittle in it and that’s a confectionery in my book).

What does it mean? Well it could mean a few things. It could be that the taste of the sweeter beers cut through a jaded palate and so are better remembered. It could also be that more and more GABS goers are relative newcomers to the world of beer and a sweet beer comes as a pleasant surprise and so gets their vote.

It could also mean that we may see even more sweet beers next year. Or perhaps there will be a “everyone’s doing sweet beers so now sweet beers are uncool” backlash and we’ll see even fewer in 2017.

One thing that is interesting to note is that the beers that garnered all the media attention beforehand don’t always make the most popular list. 7 Cent’s belly button lint beer got international coverage but didn’t make the top 10. Neither did Robe Town’s whale vomit beer.

So perhaps the public perception of GABS as being that festival full of wacky, crazy, zany beers isn’t actually true. And perhaps those novelty beers that get a lot of attention don’t get a lot of drinkers.