Like me, you’ve no doubt seen a version of those asinine “things you didn’t know about beer” lists. There could be five things on that list, seven or eight, maybe nine. I’ve seen one with 20.

Only very rarely do they actually include something I didn’t already know. That’s because they’re all pretty much the same – a skeptic might say the writers just use Google to find previous lists and steal them.

They’re not interesting. They’re not illuminating. And they shit me to tears. So please permit me to vent here.

Craft beer comes in cans
Yes, and it’s been like that for quite a while now. It’s not news any more. Really, it isn’t, so shut up about it already. You sound like someone’s mum who has only just discovered Facebook and it raving about how ‘‘new and different’’ it is.

Some beers are really expensive
Spending $20, $30, $40 or more on a beer does happen. Sometimes I’ve done it myself. But it doesn’t happen all the time. Most of the time it’s standard craft beer that’s geeks buy. But when you’re really interested in something, you’ll happily spend a few extra bucks on something.
Prices like this are only a big deal if you take the view that beer is meant to be nothing more than an alcohol-delivery device, something designed to get you pissed where flavour just gets in the way. Are these beers worth the price? Well, if you enjoy something – be it an expensive beer, dress, car or whatever you like to spend your money on – then it’s worth it.

Beer is mostly water
Yep, it’s a frigging liquid. What the fuck did you think it was made of? And, yes, in ye olden days they drank beer instead of water because the latter was so rank it would kill you. Boiling the water to make the beer sterilised it … blah, blah, blah. Enough already. 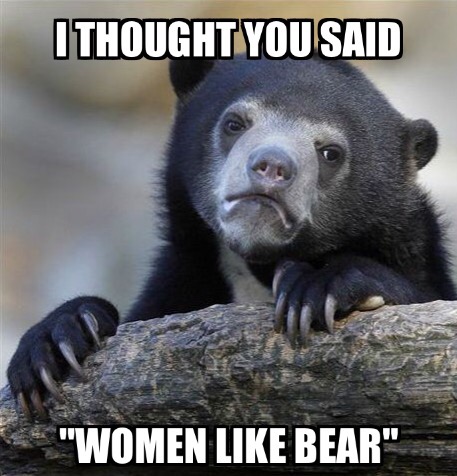 Okay, I won’t fault you for being surprised about this. But only because there are apparently thousands of people IN the craft beer world who are apparently unaware a gender other than men drink beer.
These are not just beer drinkers, but beer makers. Yep, the people who are trying to sell beer willingly come up with beer names and ads that alienate half their potential market. On the other hand, there are those beer makers who go to the other extreme and come up with some ultra-patronising creation designed with female taste buds in mind.

Which usually means it’s sweet. Because, hey, women all like sweet stuff don’t they?

Women drink beer. It’s totally normal and not at weird or unusual so stop making out as though it is. 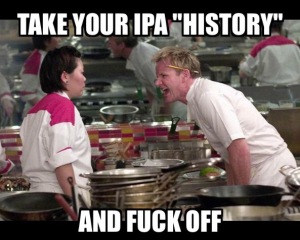 IPA was created so the beer would survive the long sea voyage to India
Oh piss off. It was not. Go and do some research that doesn’t involve Google 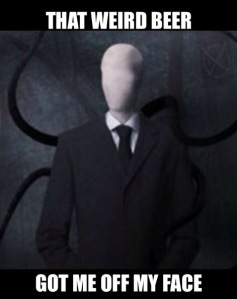 They put weird ingredients in beer
I’m a journalist and I get how a weird ingredient is an easy hook to get drinkers and non-drinkers into a story. Put it right there in the intro that a beer was made with squid ink, chewed-up bits of corn or yeast from someone’s beard and your work is done. People will at least look at your story.

But lately I’ve been getting a bit sick of the focus in stories on weirdness for weirdness sake. It tends to make the craft beer world look like a bunch of one-trick ponies who prefer chucking odd stuff into beer over the beer itself. Of course, I know that’s not the truth at all, but the focus on that aspect tends overlook the beer as a whole. It’s like wearing a really nice suit and pairing with a loud tie – all anyone notices is the tie. 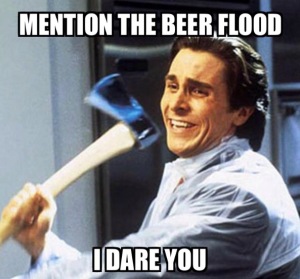 There is such a thing as the London Beer Flood
‘‘Wow, in 1814 the streets of London flooded with beer. I bet a lot of people were out there with glasses scooping up all the free drink they could. I know that’s what I would have been doing. Man, they must have had such a party.’’

Shut up. Just because there’s beer involved doesn’t make this some amusing tale – eight people died, including a three-year-old boy and a four-year-old girl. Stop treating this as though it’s some amusing beer-related anecdote. Fuck. 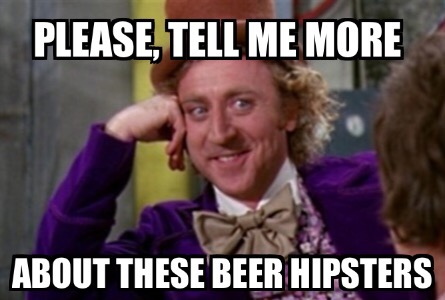 Craft beer fans are all bearded, tattooed hipsters
No, we don’t all have beards. Especially not the women. Nor do we all have tattoos. Or any sense of cool or hipness. We’re just ordinary people with a shared interest. You only focus on the bearded, tattooed hipster stereotype because those people tend to stand out. And, because of that, you know where to direct your hate. ‘‘fucking craft beer hipsters with their IPAs and their beards’’.

But, really, we’re everywhere. You just don’t notice us. But we see you making that lazy ‘‘beards and tattoos’’ stereotype. So cut it the fuck out.

Beer is good for you
At least if you believe all the bullshit in those other listicles. It’s good for your bones, they say. And your hair. And it prevents heart attacks. And it’s chock-full of vitamin B. Look, lets stop kidding ourselves.

Beer isn’t a health food – no matter how many different vegetables brewers choose to make it with. This pathetic latching onto any news ‘‘story’’ about supposed health benefits of beer is just because we want to trick ourselves that drinking beer is good for us. Because we really know it’s not but we want to live in denial about that.