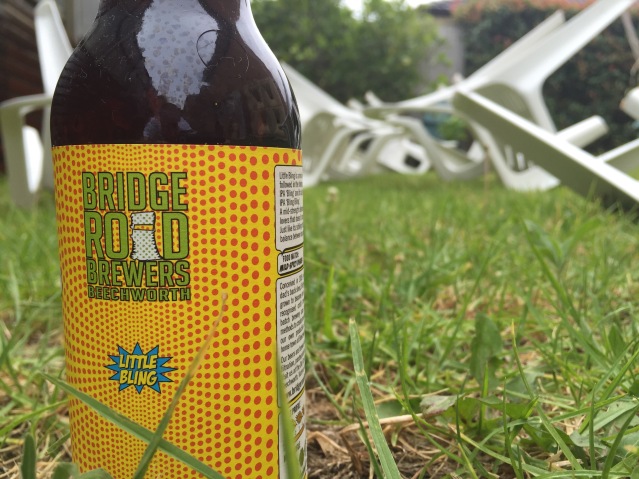 1) I think I might be getting a bit absent-minded in my old age. You see, I could swear I have written about Little Bling from Bridge Road before. So I would enjoy bottle after bottle without bothering to write down some notes in preparation for a review.

2) But I just happened to search the Beer Is Your Friend archives for a review of this beer and, lo and behold, it wasn’t there. Not even in the trash folder. Which was a good thing, because it meant I had an excuse to drink another bottle of this marvellous beer.

3) I’ve long been a fan of mid-strength beers – the sub-four percenters. To me it had been a market segment far too many craft brewers were ignoring in the high-alcohol arms race that seems to define craft beer. I mean, from a cash perspective a 3.5 per cent beer makes more sense than a 10 per cent number. You can sell someone one 10 per cent beer or three or four mid-strengths. Seems a no-brainer to me.

4) But the problem with those sub-four percenters is to try and make them not taste like they’re low in alcohol. From my brewing knowledge a low-alcohol beer gets that way by reducing the amount of malt (the fermentables that yeast turns into alcohol). It also lends body to beer, so less malt can lead to a beer lacking in mouthfeel and seeming a bit thin.

5) Little Bling, at just 3.4 per cent, overcomes that better than any other mid-strength I’ve had. There’s just the lightest hint of thinness at the very front of the palate – aside from that there’s nothing other than the label to indicate this is a mid-strength. To make it tasty, there’s a lot of piney-resiny hops – enough to provide balance but not so much that they overwhelm the beer. I’ll happily name this as one of  my favourite beers.

Tagged as: Bridge Road Brewers, Little Bling, mid-strength, one of my favourite beers