The beers we drink round here

Once upon a time, the only beer you could get was the one brewed by your local brewery. That was in the days before refrigeration, where accepted wisdom was that people should only drink beer within sight of the brewery.

Things got better and soon the quality of beer improved so that breweries could service a whole state. And this led to state-based drinking; the drinkers in that state would be super-loyal to their brew, insisting that it didn’t taste like that piss from over the border – even though it probably did.

Now, in this era of globalisation it might seem a safe bet to assume the parochial era of Australia beer is long gone. But you’d be wrong. There are still beers peculiar to each state and – they might even be beers you’ve never heard of before.

From what I’d been able to figure out, the only place that doesn’t have a local-only beer is Canberra. Some of these beers we’re about to talk about can be bought via the internet, so they’re not impossible to get; but you do have to do some work for them. Others, well, I had to rely on beer mules to pick them up.

So lets start off with my home state of NSW. The range of Reschs beers – including the ‘‘silver bullet’’ that is Reschs Pilsener – are only available in NSW. It’s become the NSW hipster’s ironic drink of choice. Because hipsters are idiots who drink things to make a statement rather than because they actually like them. By the way, I’m not sure if it’s spelt Reschs, without the apostrophe, or Resch’s, with one. But neither is CUB – they spell it without an apostrophe on the bottles but with one on tap handles. Yes, things like this annoy me.

There’s also a tasty dark beer called Sheaf Stout, which I understand is only available in NSW.

CUB also make a Queensland-only beer in the form of Power’s Gold, so named for the former publican Bernie Powers who took on Alan Bond in the beer business – and won. Of these local beers, this was the only one I didn’t get a chance to try, but, given Dan Murphy’s description of the beer as ‘‘cheap and value for money’’, I’m kind of glad about that. Because in that context, the word ‘‘cheap’’ doesn’t appear to be a reference to cost. 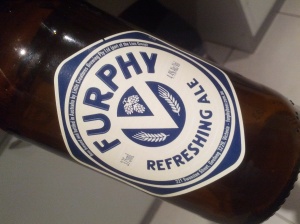 Down south in Victoria, they’ve got the newest parochial beer – made by Little Creatures,. though you’d hardly know it because the name is printed in teeny weeny writing on the label. Called Furphy’s Refreshing Ale, it’s apparently only available on tap in Geelong and, as for bottles, well, that’s only in Victoria.

While it’s a beer that has confused some beer geeks in Victoria – ‘‘why would craft beer brewer Little Creatures want to make a mainstream beer?’’. It is a fair question and it does seem a curious backwards step. But I still found it a tasty beer when compared to others in the parochial beer space.

There’s also a Victoria-only stout in the oddly named Abbotsford Invalid Stout. I can only assume that was named back in the day when beer was thought of as nutritious and likely to help the bedridden.

Over Bass Strait and into Tasmania and we have the mother lode of parochial beers. Which is weird because it’s the smallest state. Those islanders are keeping no fewer than FOUR beers from the rest of the country – Cascade Draught and Cascade Bitter, as well as XXX Ale and Wizard Smith’s from Boag’s. And, despite best efforts, I couldn’t get any of them by mail order. I had to rely on a beer mule to bring back the Cascade beers. And neither were that great – in fact they tasted so similar I wouldn’t be surprised if they used the same yeast.

Heading over to South Australia and, once upon a time, the local beer was Dr Tim’s Traditional Ale. But I’ve seen that in more than a few bottle shops in NSW, so it doesn’t count. Which leaves the South Australians with West End Draught, established in 1859 but owned by Lion since 1993. The bottle proudly claims to be ‘‘South Australian brewers since 1859’’ but also ‘‘brewed and bottled in Australia’’.

Not ‘‘South Australia’’ but ‘‘Australia’’ – which leads me think there’s not a lot of South Australian brewing of West End going on any more. Which is good, because I had to pour it down the sink after a few sips because of a weird plastic note through the beer.

They also have Southwark Stout, which I can’t class as a state-based beer because though it does pop up in NSW every now and then.

Another local beer with misleading brewing origins is WA’s Emu Bitter. It’s ‘‘beer for Western Australia’’ but is brewed in South Australia and shipped over. It’s also ‘‘a real bitter for a real man’’, so Western Australian hipsters know to keep their hands off.

It’s still hard to find anywhere else but Western Australia – I ordered some through Dan Murphy’s. And, with God as my witness, it’s not that bad; for a mainstream beer there’s a surprisingly high level of bitterness which makes Emu pretty interesting.

And we finish our local beer trip around Australia at the Northern Territory and the only local beer that comes in a bloody big bottle. This would be NT Draught, the beer that filled up the Darwin Stubby. I got to try a schooner of this on a trip to the Northern Territory last year. After a few days of travelling on a bus, camping at night, I was hot, tired, dirty and cranky – and the NT Draught went down well. So I had another one.

Glad I did, seeing as how CUB has all but ended brewing NT Draught.

There you have it, at least nine examples that state-based beers are still alive and well. So if you’re on Untappd, there’s a few more unique check-ins to hunt down.

Giving a free Zoom talk Friday week on this true-crime book I wrote in 2019. So that means I have to re-read it to refresh my memory.