Matilda Bay – a tale of too many beers

By now, you’ve probably heard that CUB plans to tinker with the Matilda Bay brand.

A large part of that is spinning off Fat Yak to effectively make a new brand, by inducing a milder version called Lazy Yak.

If all this is new to you, then you probably should go and read this.

|Anyway, with the thought that some of the Matilda Bay range will likely disappear, I went out and sourced as many of them as I could. You know, in case it’s the last time I get to try them.

The funny thing is, here I am getting all wistful about the possibility of these beers disappearing, but I hadn’t drunk most of them for ages. Here I am not happy about CUB looking to axe some of their beers, even though they’re the very same beers I don’t bother buying.

It’s like I want these beers to stay around, but I just don’t actually want to drink them. And I reckon I’m far from alone on that score.

CUB has had trouble trying to market Matilda Bay – the rising tide of Fat Yak hasn’t floated the rest of the brewery’s boats. Having bought a bottle of every Matilda Bay beer I could find, it was immediately apparent what part of the problem was. 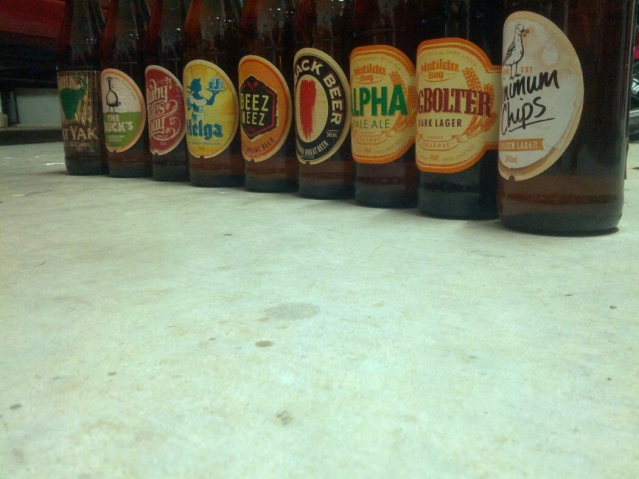 There are just too damn many of them. Look at that picture – there are nine different beers there – NINE! And it doesn’t include the tap-only Itchy Green Pants or the Dirty Granny cider. There are THREE pale ales (four if you count IGP), THREE lagers and two wheat beers.

If you’re going to have such a big range, what’s the point of that level of duplication? Also, where’s the porter, the stout, the IPA or the pilsner? Say what you will about James Squire – who is effectively Matilda Bay’s rival – they keep things simple. If they make a style of beer then that’s it, they move onto the next thing. They don’t keep crowded the market with multiple beers in the same style.

Really, it’s a portfolio of beers just ripe for some consolidation. And maybe some rebranding. If Fat Yak is selling, then it makes business sense to spin that off with some other beers (though I’d question the launch of Lazy Yak – the last thing we need is ANOTHER pale ale from Matilda Bay). Maybe we’ll see an Feisty Yak IPA, or some of the other Matilda Bay beers rebranded as a Yak.

Dogbolter’s an obvious keeper as it’s the only dark beer they’ve got and Alpha needs to stay as it keeps winning awards. Redback is their oldest beer, and still goes all right, so that deserves to stay too.

In terms of what beers to get rid of, one is a no-brainer. They can punt recent addition The Duck’s, thereby cutting back on the pales. They could also chop the amber ale Ruby Tuesday as well – but that’s just because I dislike amber ales.

After that things get a bit tricky. While I personally like Minimum Chips (the beer, that is. I think the Victorian-centric name is dumb) I know plenty of others would like to see it disappear. And while others would want Beez Neez to stay – mainly for sentimental reasons – it doesn’t do anything for me.

The surprise packet in all this was the Munich style dry lager Helga (previously Big Helga). I’m not sure if this beer is still available – I had a bottle sitting around at home – but it was surprisingly good. And I normally hate lagers.

So ultimately, I’d get rid of Ruby Tuesday, Beez Neez, The Duck’s and, under a bit of sufferance, Helga. In conclusion, I’ve got no financial skin in this game and choosing which beers to axe was quite hard, so I can only imagine how difficult it must be for CUB.