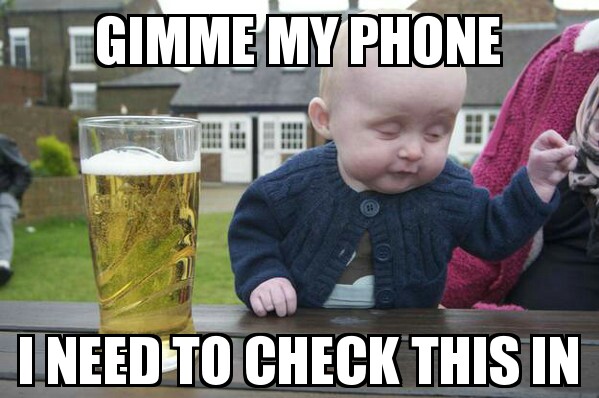 Walking away from Untappd was something that had been brewing for quite a while. I had realised I used it quite anti-socially; I didn’t leave messages on other users’ check-ins and, frankly, couldn’t be arsed toasting them any more either.

As to my own check-ins, well I didn’t leave any tasting notes, star ratings or even a location where I drank a particular beer. All I would do was open a beer and then look for it on Untappd, check it in and then drink the beer. Untappd for me had become nothing more than a fancy way of keeping tabs of the range of beers I had tried. And, to be honest, I didn’t really care to do that any more. No matter how many new badges Untappd created.

I observed a few interesting changes in my behaviour after giving up that app. It occurred just before I received my order from TruBru of their selection of GABS beers. So my first reaction was – no word of a lie – ‘‘What’s the point of drinking these if I can’t tell people I am drinking them?’’. Yep, the urge to share a check-in via Twitter had someone become more important that the enjoyment of the beer itself. It was as though the beer wasn’t as enjoyable if I couldn’t tell someone else I was drinking it.

At the time it felt like a real issue. But, after a while, I realised I was being totally stupid. Since then, I can actually say it’s been quite a pleasure to sip from a beer without needing to reach for the mobile phone to complete the once-obligatory check-in.

Related to this, I also found a decline in any urge to try a new beer. Yes, because I no longer had any need for unique check-ins. There was a time when I would buy any new beer I saw, largely because of the unique check-in possibilities. But with that urge gone, I was able to pass by some of those beers.

Which beers did I buy instead? Ones I had actually had before and enjoyed. With Untappd, they would have felt like a ‘‘wasted’’ beer, because I couldn’t get a new check-in. Without Untappd, it didn’t matter – I could drink whatever beer I wanted.

In fact, it wasn’t until I’d given Untappd the flick that I really noticed this subtle influence on my beer-buying habits. Now I no longer go hunting through bottle shops for new, different beers. Nor do I pay attention to the Dan Murphy’s website to see if they’ve got new stock in.

Now, I can drink whatever I want, free of some stupid urge to tick off the beer on some website that rewards – nay, encourages – unnecessary drinking by rewarding us with stupid little badges.

Speaking of which, I’ve probably now got the ‘‘I Quit Untappd’’ badge. You know they probably have one of those too.