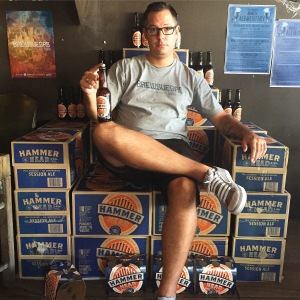 Why do you do it?
I ask myself the same thing most days but generally it’s because I enjoy good beer. When I first started penning blog posts it was all about blurting my feelings out and getting them down in written form. I’ve always enjoyed writing and have a fondness for writing short stories. I’d never claim to be good at it mind you! I simply enjoy it.
Once I realised that nobody was trumpeting Brisbane’s growing craft beer scene on a regular basis, I took a liking for that too. Back in early 2013, there was a small handful of local beer bloggers and we all had our own niche. Nobody was spouting Brisbane, Brisbane, Brisbane so I decided to embrace that.

What else have you got going on in your life?
I’m a father to three boys so when I haven’t got a beer in my hand – and a laptop or iPad in my face – I’m usually chasing the youngest two around the house or backyard.
I also contribute written pieces for craftypint.com (as regularly as I can). It’s sometimes tough to distinguish what’s craftypintable and what’s worthy for 250 Beers and bloggable.
I’ve recently managed to turn my back on a 9-5 job having accepted the role of Brand Ambassador for Newstead Brewing Co. here in Brisbane … and I cannot wait to get stuck into it.

What makes you keep writing if you’re not getting paid for it?
Simply, for the love of beer and we have a fantastic beer community in Brisbane. It’s a great feeling when somebody comes up to me and acknowledges a certain blog post or corrects me if I’ve said something incorrect. Knowing that people actually read 250 Beers keeps me chugging along.
Also, free beer. There’s no skirting around the fact that everybody loves free beer. I get sent a fair few bottles. This isn’t why I write and maintain a blog of course but it’s a wonderful occasional perk and one that I will never take for granted.

What’s one of your blog posts that you like the most?
This is a tough question and one that I’ll avoid slightly. The blog posts that I’ve had the most fun with are the April Fool Day gags. This year’s attempt in particular managed to sucker in a ridiculous amount of people across all of my social media avenues. I’d suggested that there was going to be a brand of beer under the 250 Beers banner with an impending release of a QIPA (Queensland IPA). The response was so crazy that I decided to reply to everybody individually with an apology.

One tip about beer blogging that you’d like to share?
I’ve been asked this before and I always say ‘‘be original’’. I mentioned above that there were a few beer bloggers in Brisbane a few years ago. That number has increased three-fold since then. I think it’s important for every blogger to maintain their own original stance and personal approach to their blog. They say that copying somebody else’s work is the greatest form of flattery. It actually frustrates me. Not that anybody copies my gear! I’m just sayin’.

The phrase ‘‘craft beer’’ – love it or hate it?
I’m a fence sitter. I don’t love it and I don’t hate it either. As has been said before there needs to be a phrase to differentiate between the craftier side of beer and the term ‘mega-swill’ (a phrase that I detest). I use ‘craft beer’ because a lot of my readership/followers relate well to it so why not?

One thing that still surprises you about the beer scene?
I still get surprised by how small the scene is in Australia. I have to keep reminding myself how much room there is to grow and that we do live in a small bubble of fellow good beer lovers. Plus, I’m surprised how much Brisbane’s scene has flourished in such a short space of time. There are bigger things afoot too which will further stamp the intentions of this crafty movement here in the sunshine state.

And one thing you hate about it?
Beer snobs and beer wankers! It’s very easy to become one and I’m very good at holding my breath in arguments these days and not overstepping the fine line between beer geek or beer nerd. The territory of a beer snob or a beer wanker is a place where we do not need to expose those that are taking their first craft steps.

Just recently I made it public that I enjoyed a beer or two brewed by Australian Beer Co – from their Yenda range. There was a little bit of uproar on the 250 Beers Facebook page. God forbid that I like a beer that somebody else doesn’t agree with! I was verbally confronted by people (predominantly from the beer industry i.e. ‘in the know’) that weren’t keen on Coca-Cola Amatil’s (CCA) involvement in ‘craft beer’. I take their point of view that CCA could out-muscle smaller breweries and existing tap space however how dare they tell me which beers I can and can’t like!

I’m not sure if the Yenda episode falls into snobbery or wankery but it didn’t sit well with me. Please, let people drink what they want to drink.