A great guide to booze 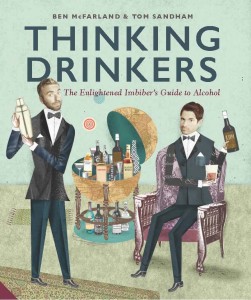 inside back cover of this book. I have to say, that’d go great on a business card – ‘‘expert on alcohol’’. Though you’d have to be careful who you passed your card onto because the phrase can also be interpreted as ‘‘I’m a drunk’’.

But these guys aren’t drunks. Or inebriates. They’ve managed to make a decent living banging on about booze in print, on radio and TV and running education classes. They’ve even written their own stage show, the critically acclaimed Thinking Drinker’s Guide to Alcohol.

As it is a spin-off from the stage show, this book uses a lot the same material. And mixed in the same vein. It’s an entertaining collection of lesser-known booze facts, comedy and a genuine alcoholic education.

It’s divided into chapters based on alcoholic beverage – beer and cider, wine, whisky, vodka, rum etc etc. Each chapter includes a potted history and timeline of the beverage as well as a chosen Distinguished Drinker who was partial to said beverage. For instance, beer’s Distinguished Drinker is some guy named Jesus Christ.

He’s there because the authors contend that Jesus didn’t turn water into wine, but rather into beer. I have to say, their reasoning behind this makes a lot of sense. And would also be an example of the loads of interesting facts crammed into this book.

If you want to know a bit more about all sorts of booze, but be entertained while you’re learning, then you need to check out this book.

Score - $5 from Coledale markets. Another one for the growing compilation album collection.